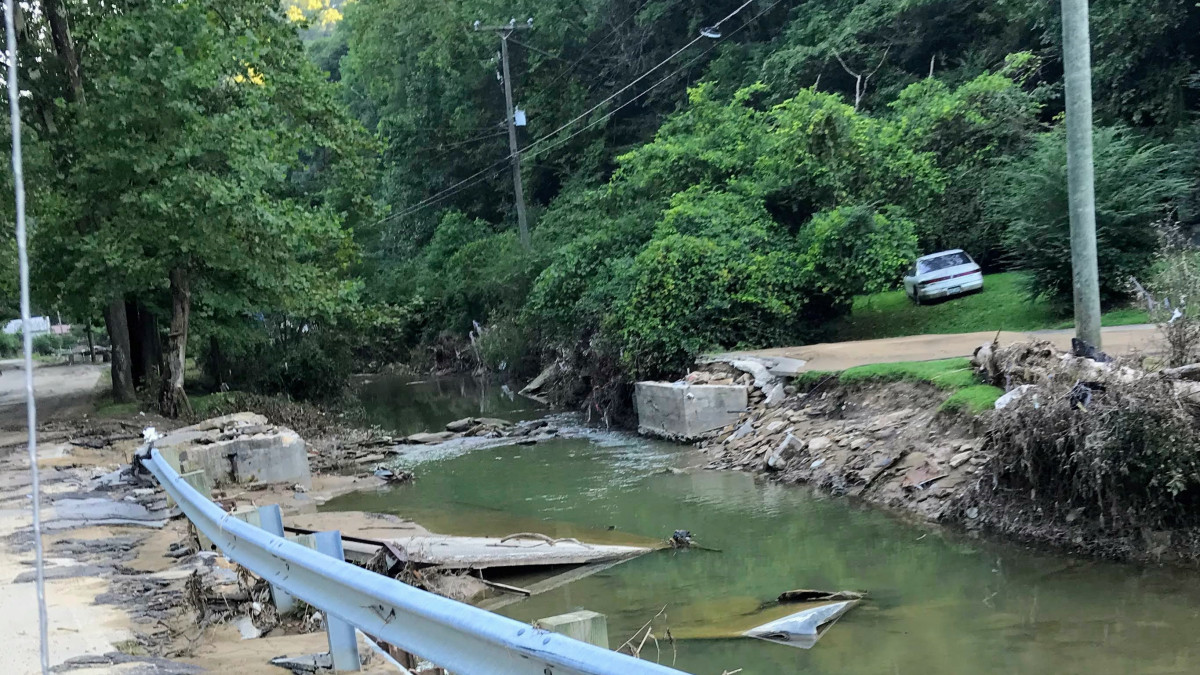 ReachGlobal Crisis Response has been responding to the flash floods in Kentucky for months. One of the most important parts of working in the small communities around Hazard is getting to talk with the homeowners and help them process their experiences. One of our staff was able to sit with Miss Michelle and listen to her story of how God saved her during the dangerous summer floods.

Michelle lives about fifty yards from Troublesome Creek in Hindman, KY, with her house clinging to the side of the mountain. Most days the view from her house is like a postcard from any alpine area. But late July, that changed suddenly. Michelle had noted the rise of the creek on the evening of July 27th, but she was not aware of just how quickly the creek was rising. When the water reached the fence in the front of her yard she began to gather her important papers and her beloved beagle puppy, Daisy, with the intent of leaving before things got too bad. When she stepped out of her back door and down to the ground, she quickly discovered the water was already up to her waist.

One of the items Michelle grabbed was a flashlight; it was a bit finicky and not the most reliable. It had a tendency to shut off at the most inopportune moments. That night, however, as she struggled to get to higher ground and fussed with Daisy, she found that the light was quite reliable and threw its beam out in front of her without faltering. During the climb to safety, Daisy was constantly struggling to climb higher onto Michelle’s shoulders to avoid the water. As Michelle was trying to get to safety, she watched as the body of her neighbor was swept past her in the raging current of the creek, which was now pulling houses off the foundations and hurtling cars along in the torrent of water below her.

Finally Michelle reached higher ground where she was safe from the water. The flashlight had been a faithful beacon throughout the entire escape. Since that night, Michelle hasn't been able to get it to turn on at all. New batteries and cleaning have not revived it, but it served her the whole time she needed it.

Water flowed over six feet inside her home, covering the circuit breaker panel inside. She was able to get help from various groups assisting in recovery efforts. During a workday with Samaritan’s Purse, Michelle told the volunteers about her experience. They stopped working and prayed with her and asked if she was ready to accept Christ as her Lord. Michelle had witnessed so much devastation, and even watched helplessly as the body of her neighbor got swept away. Knowing that she had been spared, Michelle was indeed ready. She prayed right then to accept Him as her salvation.

Within a few days her sister suggested that she should consider baptism. The day her sister suggested it there was a team from a church working on clearing debris and materials out of her home. Michelle asked to go down to the now clear, calm waters of Troublesome Creek and she was baptized that same day.

Please pray with us for Michelle, for her sister, and for the dozens of families in Eastern Kentucky who are still trying to make sense of what they experienced. Pray for the local churches, our staff and volunteer teams who are supporting these families and walking alongside them. Your church can be a part of what God is doing there by giving to the response or by sending short-term teams.