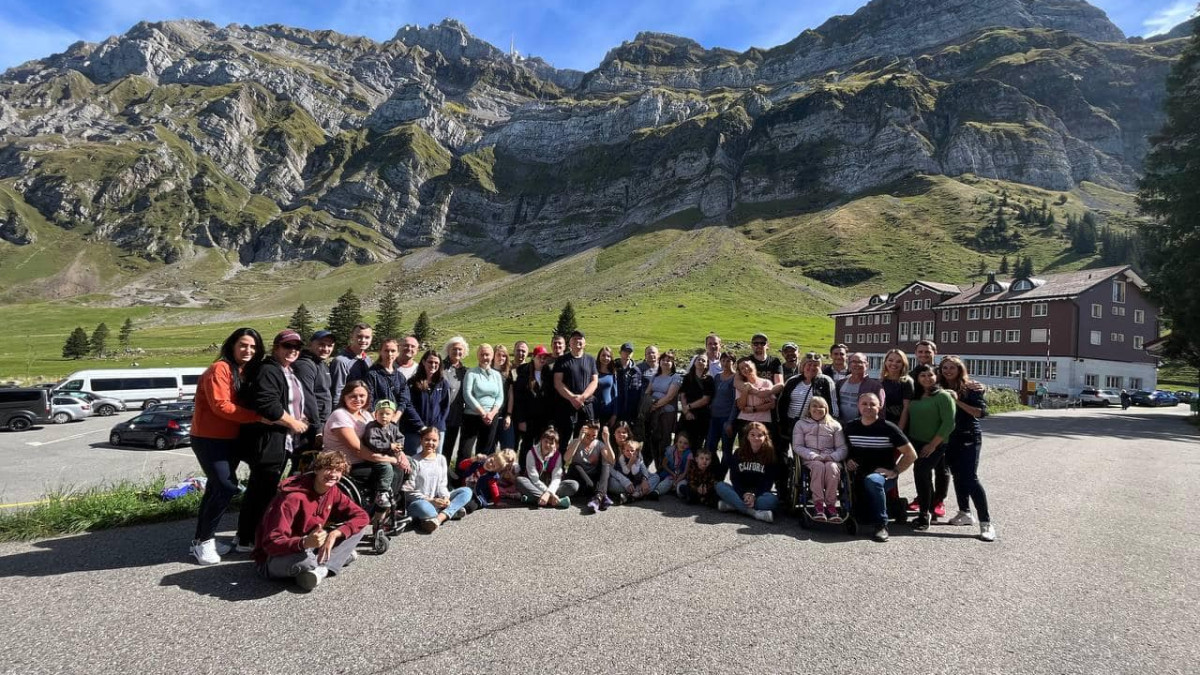 Long before the first tanks rolled from Russia into Ukraine, God was putting pieces together to work a miracle. Back in 2010, when Serhii and Nataliya Bolchuk were still developing their ministry to disabled Ukrainians, they met Martina who was working with the European Disability Network. The three became friends through their shared passion for ministry for disabled persons. That friendship continued over the next twelve years as the Bolchuks opened the Agape Rehabilitation Center and as they poured their hearts into loving people one by one.

When Martina saw the news of Russia's invasion of Ukraine from her home in Germany, her heart broke and she wanted to help, but she didn't know how. She heard from a friend in Great Britain that he was going to the border to help refugees because he had a van and he wanted to help. He made a difference for not just for those four Ukrainian refugees he brought from the border, but for the many refugees that followed. Martina was inspired by his decision to do something, and she thought, “I can do that.”

She contacted Serhii and Nataliya, offering to help get them from Ukraine to Germany, but they said they could not go without the others. "We are not going to go alone, because we have many people here with disabilities," they told her.

Martina started by asking how many people they thought might come. Estimates quickly went from 10 people, to 15, to 20, and if 20 then why not take 25 people. And then the first group of refugees came together in just a couple days, and six vans went to Ukraine to bring 35 people to safety.

Just a little bit later the first group would be joined by a second group of about 40 more people. And so it grew. With each trip to Ukraine Serhii, Nataliya, and Martina were learning and building a system. Martina admitted that there were times buses or vans were on their way out of Ukraine before she knew for sure where they would be going. She contacted her friends from years of serving in disability ministry, and they contacted their friends and churches, and it kept growing. In the months since that first trip, Martina and Agape Ukraine have coordinated and evacuated more than 600 people to twelve different locations in Germany, the Netherlands and Switzerland.

Martina shared how her faith sustained her during the evacuation. "I didn't see any of you. I had one phone in my hand and three people trying to call me... I had to send drivers and not have a place, or the place changed, or I had no drivers. I thought that I needed to stay very close to God, to stay connected to him. It was very heavy on me to have these groups, and I needed to stay close to him."

Each group that evacuated needed people to serve as leaders, people to help with paperwork and be responsible for organizing the group once they arrived at their final location. Groups ranged in size from 40 to 80 refugees, and each group included many people with a range of mental and/or physical disabilities and the families who take care of them. Most men were not allowed to leave Ukraine, so there were very few men in the groups. For example, in the Rotterdam location there are only two men helping to lead and care for almost 100 people.

The team leaders have no special training. Like Martina, they found themselves being used by God to do extraordinary things simply because they had willing hearts. Many of the women who serve as group leaders left their husbands behind in Ukraine. In one location, when the refugees stopped receiving food deliveries from the government after two months, the ladies used donated bicycles to go up to 30 kilometers to the grocery stores. In another place they started an evening bible study with moms, reading verses first in Russian and then Ukrainian and discussing them together. They are doing everything they can to hold the groups together.

"They forget we are refugees too. They think we are getting paid and they expect us to have all the answers."

Months after the evacuations, the group leaders for each site were exhausted and some were even considering quitting. "I thought it was going to be easy, now it's been five months. And there are so many situations where I don't know what to do." Most of the evacuated families were very grateful, but months of stress and tight living quarters were bringing out the worst in some people. And just a few unhappy individuals were bringing down the morale of the whole group. Bad attitudes and personal conflicts were taking a toll on leaders' mental and emotional health, creating an extra burden that they weren't prepared to handle.

Nataliya and Serhii recognized that the group leaders were running on empty, so they started planning a leaders' retreat. They contacted several of their partner ministries, including ReachGlobal, to explain the situation and ask for help. Jim Baker, who serves with ReachGlobal, was excited by the opportunity to partner with the Bolchuks again and recognized that Serhii and Nataliya were describing a need for trauma care for their leaders. He reached out to ReachGlobal Crisis Response to have their trauma care team attend the retreat and provide trauma care training for the group leaders.

It took weeks to coordinate: finding staff to cook for the retreat, organizing the travel for everyone, and getting additional helpers at sites so the group leaders could leave even for a few days. By God's grace they were even able to secure permission for some men and families to leave Ukraine, so the families that had been separated could be reunited for a short time. Most of these group leaders would have served as staff at other retreats or camps for people with disabilities as a part of Agape Ukraine's ministry over the years. But for some it was their first time out of Ukraine, and for many it was the first time being at a camp that didn't involve them taking care of other people as staff.

They brought the team leaders to Switzerland, to rest and refresh in the wonderous beauty that the Lord had created. Nataliya shared with the group on the first night, "I just want for you to be renewed., physically and spiritually. We do not do this for ourselves, but for God's glory." The days were spent relaxing, visiting Liechtenstein and nearby mountains, and the evenings were spent in group worship and devotions.

On the final evening Crisis Response staff offered our trauma care training, to help the team leaders as they process their own trauma and as they help their groups process everything. Serhii had an excellent analogy for the training. "What you have done was like filling glasses with water; you stirred up the water and lifted the trash to the surface. Now we must clean it out." It was a very emotional way to end the camp, but the hope is that these leaders will feel renewed and equipped for the ministry that awaits them as they return to their groups.

As our staff sat with Serhii that final night, he was able to share his heart and passion. He shared the importance of fellowship with other believers, especially those who had not been touched directly by the war in Ukraine. "We need your presence. We need you to look into our eyes and listen. We don't need you to give us your 100%, maybe 3% or 5%. We don't need you to do something, we just need this. We need fellowship." ReachGlobal Crisis Response believes strongly in the ministry of presence, but rarely have we had ministry partners articulate their need for it so clearly. It was a humbling privilege to sit with Serhii and the other Ukrainians, listening to their stories and looking into their tired eyes.

Because of the generosity of the EFCA, ReachGlobal is able to partner with ministries like Agape Ukraine who are doing unbelievable things in unimaginable circumstances for the glory of God. Please pray with us as we explore what future partnership opportunities exist, both in Ukraine and in surrounding countries. Your generous outpouring for the Ukrainian Refugee Response allowed us to come alongside these 50 people, to directly affect the 600 Ukrainians they represent, but also to have an impact in the 12 communities who shelter them. By investing in the four days of ministry in Switzerland, we will prayerfully have an opportunity to share the love of Christ with thousands of people around Europe. Such is the power of the God we serve.