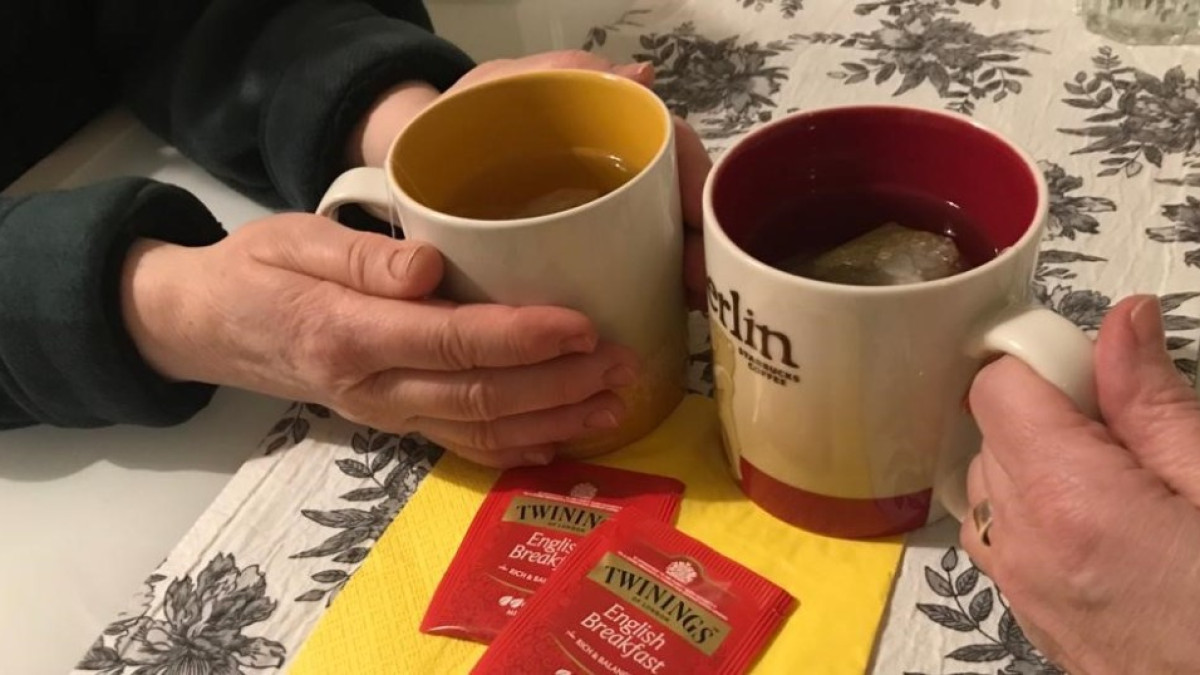 As a result of many prior years of serving with ReachGlobal in Ukraine, Julie knew how important a warm cup of black tea would be for Ukrainian refugees to help them process their trauma, so soon after the invasion she told her husband, "I'm going to need more tea." Tea, a strategic part of our refugee response!

Their home in Budapest, Hungary has become a stopping ground for friends and ministry partners who are fleeing the war, and each family arrives to a warm cup of tea. Their long-time friends, Don and Alina*, arrived with their four children just a couple days after the war started, and Julie was able to arrange for temporary housing for them. Alina's mother stayed behind by herself in Ukraine, and the family hadn't been sure Don would be able to leave Ukraine with his family, even though he met the requirement of having 3 or more children. Fortunately he was permitted to stay with his family and cross into Hungary. On arrival, Julie shared, "All of them were shivering from shock as they got out of the car, and I couldn’t get them upstairs fast enough to the warm cups of chamomile tea I had waiting."

Julie's family provided some food for them and, of course, some hot tea, and then gave the family space to recover and process. On the second morning, Alina asked if she could come over while the children were still sleeping to do laundry and drink tea. It was the comfort of a little bit of normalcy as she sat with Julie, drinking tea and looking through the last pictures she had taken of her mother and the video of her son playing the piano in their home just before they'd left. Julie intentionally asked her thoughtful open ended questions to help Alina process her traumatic experience and practiced 'Active Listening'. Julie was blessed with the most beautiful words affirming Julie's refugee response tea ministry. Alina said, “Thank you for listening.”

Julie has been able to continue this simple ministry of offering tea and a safe space to share stories with families she had never known before the war. The following day, coming out of her home Julie saw a car with Ukrainian tags that had a grandmother, mother and daughter, and a dog sitting in it. She offered to bring them inside for some tea, and they declined saying that they had reservations at a nearby hotel. Coming home after church, Julie saw the women were still in the car because the hotel would not let them in until 3:00pm. The mother, Natalia*, decided she would accept the offer of tea, so Julie brought her upstairs, brewed a warm cup of tea, and they had another intentional conversation.

Natalia even reached out later that same day, after they were settled at the hotel, to see if Julie would like to go on a walk. They walked, and stopped for food, and Natalia shared that she had never spoken to an American before because she did not speak English and had never met and American who could speak Russian. In fact, Julie was the first non-orthodox Christian Natalia had ever spoken to, and she was able to share that God loves her and her family, and He is powerful enough to trust with all Natalia's unanswered questions and concerns. Please pray for Natalia and all the other refugees who will hear the Gospel in the days and weeks to come, that they would find peace in Christ in spite of the war.

As you drink your tea or coffee each day, would you pray for each of these families and the other millions who are being displaced. Pray for their care after being displaced, and that each one would be offered an intentional listening ear to help them process their pain and loss.

It seems obvious that God is opening doors for ministry and Gospel conversations in Europe, but there are people here all around us who are going through their own crises each day. Have you ever wanted to have a healing conversation with a friend who is hurting, but you didn't know how to begin? ReachGlobal Crisis Response is offering churches a training to provide simple trauma care tools to start healing conversations. Get equipped, then pray that God might open a door and prompt you to offer a compassionate listening ear to someone near you trying to make sense of a challenge or crisis they may be facing.

If you would like to get involved with the EFCA's Ukrainian Refugee Response, you can check out the website for more information. We are prayerfully asking for $500,000 to fund a long-term outreach of churches and ministries both in Ukraine and in the surrounding countries that are hosting the 2 million Ukrainian refugees who have already fled the war. Already we have been able to send funds to purchase fuel for refugees fleeing the conflict, supplies for people stuck in Ukraine, and assisted with placing refugees in safe, transitional housing, but we need more people and churches to partner with us in this mission field.

Email crisisresponse@efca.org for more information or to schedule a training for your church.

*All names have been changed for security reasons.