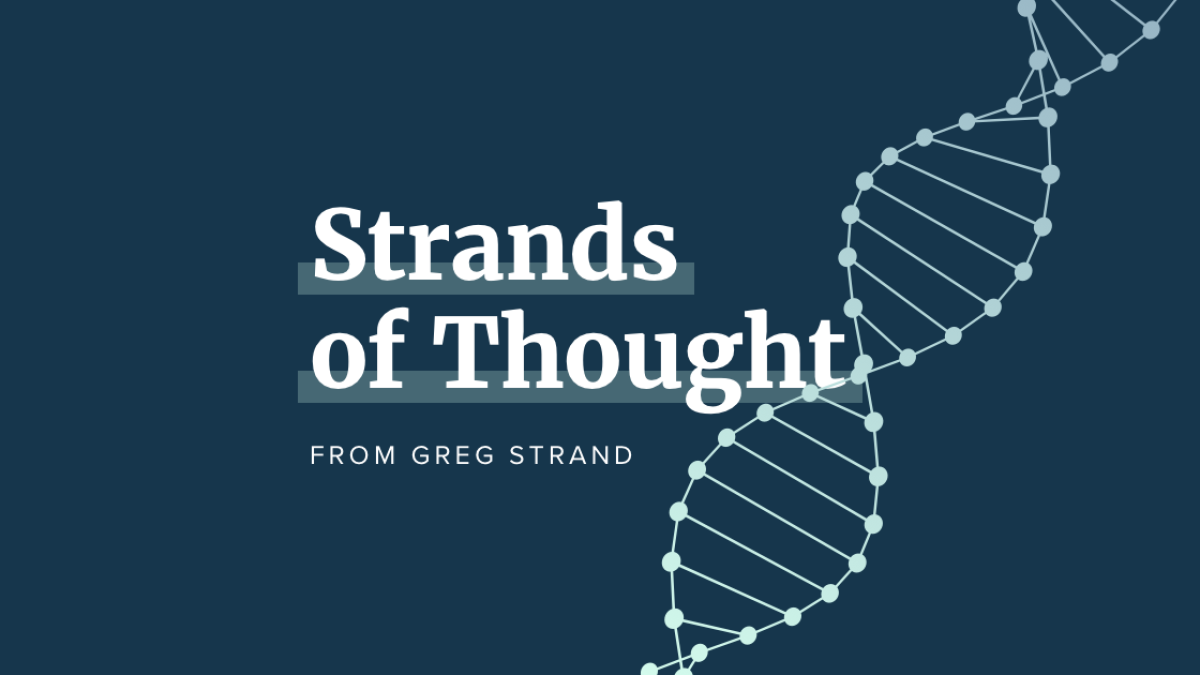 On this Good Friday, I remind you of the biblical truth of the death and burial of Jesus Christ, which we affirm in our EFCA Statement of Faith. In Article 5, The Work of Christ, we emphasize the wonderful truth, “God’s gospel is accomplished through the work of Christ.”

But for this day, which the church refers to as Good Friday, we do so for the purpose of focusing on the death of Christ on our behalf. Good Friday is good for us because of the truth stated by Peter, “For Christ also suffered once for sins, the righteous for the unrighteous, that he might bring us to God, being put to death in the flesh but made alive in the spirit” (1 Pet. 3:18).

Below I include an excerpt from the 2nd edition of Evangelical Convictions: A Theological Exposition of the Statement of Faith of the Evangelical Free Church of America. This excerpt focuses on Jesus’ death. As noted above, there is more to the story, or there is no story. But for now, on this day, we read and ponder the truth of Christ’s death for us. May it cause us all to give thanks for his inexpressible gift of his life for ours and our response in worship.

The Work of Christ

5. We believe that Jesus Christ, as our representative and substitute, shed His blood on the cross as the perfect, all-sufficient sacrifice for our sins. His atoning death and victorious resurrection constitute the only ground for salvation.

Our Statement thus far has affirmed truths about the human condition and truths about God that, when viewed together, present an obvious problem. On the one hand, we have declared that human beings are sinners by nature and by choice, alienated from God, and under his wrath (Article 3). We all stand in need of the restoration of our corrupt nature, reconciliation with our estranged Creator, and rescue from the condemnation which our rebellion against God's rule richly deserves.

Yet we have also declared the gracious purpose of God from eternity to redeem a people for himself, allowing them to share in his own triune love (Article 1). That purpose was first glimpsed in God's pledge in the Garden of Eden that from the seed of Eve would come one who would crush the head of the serpent (Gen. 3:15); it was revealed more clearly in God's promise to bless Abraham, and through him to bring blessing to the world (Gen. 12:1-3). The Old Testament story of Israel left little ground for hope, however, for Israel herself had rebelled against God and was in need of a Savior. In the light of our sinful condition, how is this purpose to be accomplished?

Many would simply echo the words of the German poet and skeptic Heinrich Heine, which he spoke as he lay on his deathbed: "God will forgive me. That's his job." Isn't forgiveness God's duty, his obligation? Can't God simply forgive freely?

But the Bible affirms that God is holy and just, which means that he cannot tolerate evil and must condemn all iniquity—“Acquitting the guilty and condemning the innocent—the Lord detests them both” (Prov. 17:15). Because of his very nature, God's role as Judge of all the earth demands the execution of justice. Evil must be seen to be evil, or cosmic justice will have no meaning; and without such a recognition even our human dignity as responsible moral agents will be undermined. Mere forgiveness of sinful human beings apart from the exercise of the judgment due their sin would be in contradiction of God's character.

The resolution of this theological dilemma, and the core of the gospel, is found in the work of Jesus Christ. Especially in the death of Christ on the cross, God's righteousness is revealed—a righteous hatred of sin and a righteous commitment to his covenant promise to bring blessing to the world. There God's wrath is poured out and his love is demonstrated, and he shows himself to be just even while justifying sinners (cf. Rom. 3:25-26).

The institutions of Israel provide the categories by which to understand the work of Christ, as he fulfills the roles of Prophet—revealing the grace and truth of God as his perfect image; of Priest—representing and redeeming a sinful people; and of King—exercising the authority of God in reigning over his creation. Our statement on the work of Christ focuses on his priestly role through which he effects our salvation by his atoning sacrifice on the cross.

Of Central Importance: Jesus Christ Shed His Blood on the Cross

The Evangelists, in various ways, present the crucifixion of Jesus in Jerusalem as the focal point of the gospel story. Matthew and Mark follow a similar story line. Matthew first alludes to the violent conflict to come in his narrative of the birth of Jesus when the wicked King Herod seeks to eliminate the one who is born king by murdering infants near Bethlehem (Matt. 2:13-18). Then, as in Mark's Gospel, early in his account of Jesus' ministry in Galilee, Matthew mentions the Pharisees' intention to kill Jesus (12:14; cf. Mark 3:6), setting the stage for what follows. After Peter's confession of Jesus' identity as the Son of God, Jesus explicitly declares that he must go to Jerusalem, where he will be killed (Matt. 16:21; cf. Mark 8:31), a destiny reaffirmed twice (Matt. 17:22-23; 20:18; also 26:2; cf. Mark 9:30-31; 10:33). Indeed, Jesus goes to his death as the fulfillment of the divine purpose revealed in the Scriptures (Matt. 26:24, 54-56).

In Luke, Jesus affirms his determination to face his death (Luke 9:22). Luke further tells us that Jesus "resolutely set out for Jerusalem" (9:51), for "no prophet can die outside of Jerusalem" (13:33). "I have a baptism to undergo," Jesus declares, "and what constraint I am under until it is completed!" (12:50).

John emphasizes the centrality of Jesus' death by the repeated reference to Jesus' appointed "hour." Three times we read that Jesus' hour had not yet come (John 2:4; 7:30; 8:20; cf. also 7:6,8). Then, as he enters Jerusalem for the last time and faces his certain death, Jesus declares, “The hour has come for the Son of Man to be glorified" (12:23; cf. also 17:1). Jesus wrestles with the torment which this entails but faces it faithfully: “Now my soul is troubled, and what shall I say? ‘Father, save me from this hour’? No, it was for this very reason I came to this hour" (12:27).

Jesus was born to die. His crucifixion by Pilate was not thrust upon him; he chose it as his divine vocation (John 10:18). He was tempted to turn from such agony, and in the Garden of Gethsemane he prayed, "My Father, if it is possible, may this cup be taken from me" (Matt. 26:39). But it was not possible, and Jesus willingly went to the cross. John records his dying words: "It is finished" (John 19:30). Jesus had accomplished that for which the Father had sent him into the world.

In their accounts of the ministry of Jesus, the Gospel writers emphasize the centrality of the cross,1 and the teaching of the apostles does the same.2 But why? What is the meaning of this cruel death? What did it accomplish?

Fundamentally, as Israel's promised Messiah, the story of Jesus in the Gospels is seen as the fulfillment of Israel's story (cf., e.g., Matt. 1:1-17). As such, he is the means by which a sinful Israel can bring blessing to the world. Jesus accomplishes this by taking on the role of Daniel's Son of Man3 and the suffering servant described by the prophet Isaiah.4 He becomes the Righteous One who bears the sins of his people, bringing forgiveness and restoration (Matt. 1:21).

Simply put, the New Testament proclaims that Jesus died "for our sins" (cf., e.g., 1 Cor. 15:3; 1 Pet. 3:18; Rom. 3:25-26; 5:8), implying that Jesus' death provides the means by which our sins are forgiven or taken away (Eph. 1:7). Jesus himself pointed his disciples in this direction when he spoke of his ultimate act of service in terms of giving “his life as a ransom for many" (Mark 10:45; Matt. 20:28). This connection was confirmed during the Last Supper. In preparing his disciples for his imminent death, Jesus spoke of the cup as "my blood of the covenant, which is poured out for many for the forgiveness of sins" (Matt. 26:28).

This reference to "blood" signals a sacrificial significance to Jesus' death, especially since it was made at a meal which celebrated the saving work of God through the blood of the Passover lamb sprinkled on the doorposts of the families of Israel. Blood was a central aspect of the sacrifices prescribed in the Old Testament (cf. Heb. 9:22), as it testified to a life poured out in death (Lev. 17:11).5 The "blood of Jesus" became a common way of speaking of Jesus' death as a saving, sacrificial act. In Christ, "we have redemption through his blood, the forgiveness of our trespasses," Paul writes (Eph. 1:7; cf. 2:13; Col. 1:20; Rom. 3:25; 5:9). John affirms that "the blood of Jesus his Son cleanses us from all sin" (1 John 1:7; cf. Rev. 1:5; 12:11). And Peter speaks of our being ransomed "with the precious blood of Christ, a lamb without blemish or defect" (1 Pet. 1:19; cf. John 1:29). In Hebrews this theme is expounded in even greater detail (Heb. 9,10; cf. especially 10:19). Jesus' death must be seen as an atoning sacrifice for our sins.

Christ's Atoning Death: The Perfect, All-Sufficient Sacrifice for Our Sins

The New Testament description of Jesus' death as an atoning sacrifice finds its fullest expression in the Epistle to the Hebrews. There the Levitical priesthood and the temple worship provide the paradigm for understanding the work of Jesus. The Old Testament priests offered the same sacrifices year after year for themselves and for the people. The repetition of these offerings, however, bore witness to their ineffectiveness in perfecting the worshippers (Heb. 10:1-3). "But now," we read, "[Jesus] has appeared once for all at the culmination of the ages to do away with sin by the sacrifice of himself" (9:26). Jesus assumes the roles of both the high priest and the sacrificial offering as he offers himself to God, making perfect those who draw near to God through him (10:14).

Jesus' atoning sacrifice is "perfect" (that is, complete, absolute, optimal, unsurpassed), based on the nature of that sacrifice. If the blood of bulls and goats could effect ceremonial cleansing in the worship of God, how much more can the precious blood of Christ cleanse our hearts so that we might serve the living God (Heb. 9:13-14). It was impossible for the blood of bulls and goats to take away sin; that was but a shadow of the reality to come (10:1,4). But in Jesus that reality has now appeared, and by the sacrifice of himself once for all, "he has made perfect forever those who are being made holy" (10:14). His perfect sacrifice obtains "eternal redemption" (9:12). It was not with perishable things that we were redeemed, "but with the precious blood of Christ, a lamb without blemish or defect" (1 Pet. 1:19).

The Gospel of Mark has been described as a passion narrative with an extended prologue.