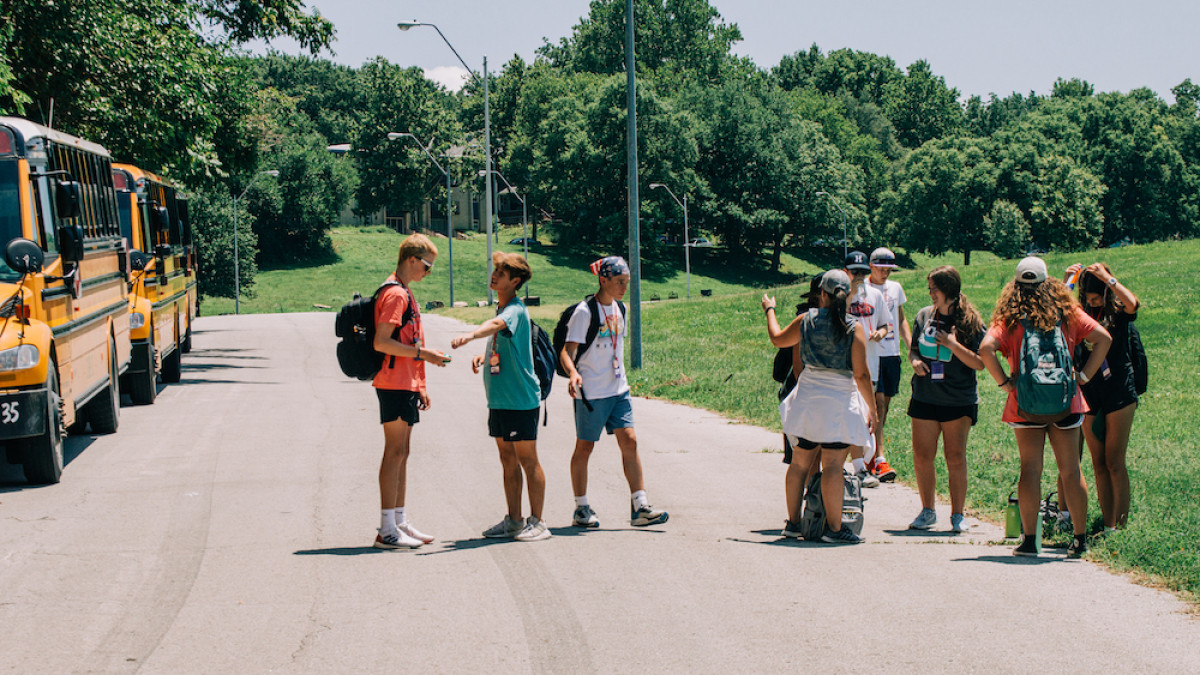 Wes Tarbox, who his students affectionally call “T-Box,” is the youth pastor of Grace Church in Allen, Texas, a sizeable suburb of Dallas. He’s served in youth ministry for a little over 20 years, first as a volunteer and then transitioning into a full-time youth pastor.

This year, he, his wife Melissa (the students call her “She-Box”) and sixteen volunteers loaded 82 adolescents onto two charter busses to make their biennial, 8-hour trip to Kansas City, Missouri to attend Challenge conference, the EFCA’s national student conference. They brought the most students from a single youth group.

For two Wednesdays, they prayed over the trip, asking God for blessing and a renewed fire, passion and energy that they can take back to their church and lead.

But Wes also needed prayer. Within the last few years, while dealing with health issues that include a battle with kidney cancer, he has sought the Lord’s direction regarding his role in ministry.

At their youth group, they put up a prayer wall in the sanctuary. The kids fill out prayer cards with their picture and stick them in a little envelope. This time, Wes added his own prayer card requesting for the Lord to reaffirm ministry for him. He waited.

Waiting for the outreach event

On the second day of Challenge, starting at 1 p.m., groups of students and student leaders massed into a large ballroom, waiting to flood the city and surrounding communities with prayer and acts of service. In the hallway outside the room, Wes led his 82 students through the sea of people. Three school buses planned to transport them to Kessler Park to pick up litter and waste.

Inside, the students sat in clusters, preparing for the heat outside. Many applied sunscreen to their faces and arms. Others massaged each other’s shoulders. A circle of boys volleyed a ball back and forth to pass the time.

Meanwhile, Wes' team did headcounts. He balanced paying attention to the youth with his administrative duties, occasionally pulling away to join different youth circles, asking them questions and joining in when they wanted him to take a picture with them on their smartphones.

Yet, leadership and administrative duties beckoned. While they waited for the buses, a small problem struck—a student left their phone in the dining hall and a team member asked Wes if they should go back and find it. He thought about it for a moment and said, “No, we’re leaving soon. We’ll have to go find it when we get back.”

Fortunately, the phone found its way safe and sound in the Challenge lost and found. It was eventually recovered in what Wes said was a small “faith-building moment for the student in a week of many.”

Wes never originally intended to become a youth pastor before volunteering. He graduated from Austin College with a business and finance degree and pursued an MBA at the University of Texas—Dallas but stopped pursuing it, not believing it provided value to his business endeavors. He played baseball in college and continues to coach high school baseball today. He owns a real estate investment company.

“I had an elder in our church, when I was probably 25, say, ‘Hey, I need you to take over this fifth and sixth grade class for a few weeks. Can you do that?’” Wes said. “After two weeks, I knew that's where I was supposed to be. My eyes were opened. And if you'd told me when I was 18 that I'd be doing youth ministry when I was in my mid-30s into my mid-50s, I would have scoffed.”

“After two weeks, I knew that's where I was supposed to be. My eyes were opened. And if you'd told me when I was 18 that I'd be doing youth ministry when I was in my mid-30s into my mid-50s, I would have scoffed.”

As he continued to volunteer in the early 2000s with the youth, the pastor and elders called on him to lead the youth ministry full time. It was no easy decision.

"I had friends, when I went into vocational ministry 15 years ago and decided to cap my business, that said, ‘Man, you are stupid. You’re on pace to retire at 52. What are you doing?’”

Wes stepped out in faith anyway. When he entered into the ministry, it was important to him to receive his credentialing with the EFCA. To accomplish that, he applied to the EFCA GATEWAY program, a low-cost, alternative program for leaders like Wes to receive theological training that also provides a pathway for those interested in receiving a ministry credential. He graduated, applied for credentialing and became an ordained EFCA pastor.

When Wes started, the youth ministry numbered 30 students. Over the years, the ministry grew under his leadership. Today, they count around 150 students in their youth group. When I asked him what he thought led to the growth, he didn’t point to any one strategy. Instead, he said they’ve tried to cultivate a unity of the Spirit, and students often invited their friends to come.

Volunteers pointed out a few other reasons. Joy and Bonnie, two volunteers new to the Challenge experience, both appreciated Wes’ administrative and communication skills.

The students often pointed to something else, though: he’s not afraid to talk about difficult subjects. They appreciate that he speaks on big issues, and while they can sense that he doesn’t want to upset anyone, he also isn’t afraid to speak the truth.

“T-Box is very real,” Ben, a 17-year-old student, said. “I don’t know how he does it, but he finds a very easy way to make messages perfect for seventh graders up to the older kids.”

Wes believes it’s important to speak about tough and difficult topics, saying, “If we don’t, who will? If we don’t talk about these things with the next generation, they’ll only hear the crud from our culture.”

To find out what the students want to talk about, Wes created a “topic box” that he sets out on Wednesday nights. The students can put their ideas in the box on what they want Wes to address. The topics have ranged from LGBTQ+ issues to the doctrine of hell. Whatever the subject, Wes trusts that at the end of the day the Holy Spirit works before he even opens his mouth.

Go on any kind of trip, whether a road trip with family or a missions trip to another country and you're bound to end up facing unforeseen problems—in this case, Wes and his group got lost. Baking under 91-degree heat, the school bus sweltered. They drove in circles for twenty-five minutes, trying to find the correct location in the large park. Wes and his students were relatively unfazed by the heat and the wandering. While Wes calmly spoke with the leaders about what they should do, the students broke into song, singing the lyrics from the Sunday school favorite, “Father Abraham.”

“T-Box is very real,” Ben, a 17-year-old student, said. “I don’t know how he does it, but he finds a very easy way to make messages perfect for seventh graders up to the older kids.”

“We’ll figure it out. We’ll be alright,” Wes said to one of the volunteer leaders.

When they found the correct location, students flooded out of the doors. A group of students huddled around Wes next to the front bus. He cupped his hands around his mouth so everyone could hear him give directions. The objective for the day was simple: Take a black trash bag and start picking up trash along the dirt road in the park. When Wes finished, students eagerly got to work.

One of Wes’ priorities with his students is training and raising leaders by teaching leadership qualities and giving them practical outlets to use their skills. He pointed to the various teams they have in the youth group, including the worship team and the missions team.

When they finished, the students created a mountain of black trash bags in the middle of the field for a truck to come and take it all away.

Since 2000, Wes has taken his youth group to Challenge. Over the years, he’s witnessed the impact it has on his kids, which is why they continue to come back every two years. He’s watched as several young people decide to become youth pastors and enter vocational ministry directly because of their experience at the youth conference.

“I have seen some literally go, ‘You know what I was going to graduate and go do this, and now I want to go into ministry,’” Wes said.

“Our kids said, ‘We’ve got to fight for this,’” Wes said, “It’s neat when kids come back on fire, to seek opportunity [at home] and not just leave it [at Challenge].”

Throughout Challenge, Wes waited for God to answer his prayer and reaffirm his call to ministry. Eventually, God sent Pastor Daniel Perez. Daniel Perez grew up in Venezuela where his parents became Christians through missionaries from the EFCA. He recently planted Encuentro Church in Odessa, Texas.  Wes was tremendously encouraged by connecting with Daniel.

“He’s just a gift from the Lord. Without even trying, he completely reaffirmed where I needed to be. So that was an answer to prayer. And God used another brother to do that,” Wes said.

Yet, even if God called Wes away from ministry, he likes that ministry would continue either way. He’s not interested in it being about him and instead focuses on raising Christian student leaders that would continue meeting on Wednesday nights and speaking the truth if adult leadership stopped.

“We have young men and women who would step up and lead the messaging. They would go out into the city. They would tell other people about Jesus,” Wes said. “In ministry, you want to always rebuild and replace yourself. My prayer is that we continue to keep on keeping on and that the next generation continues to grow and perpetuate the truth that we have given them.”