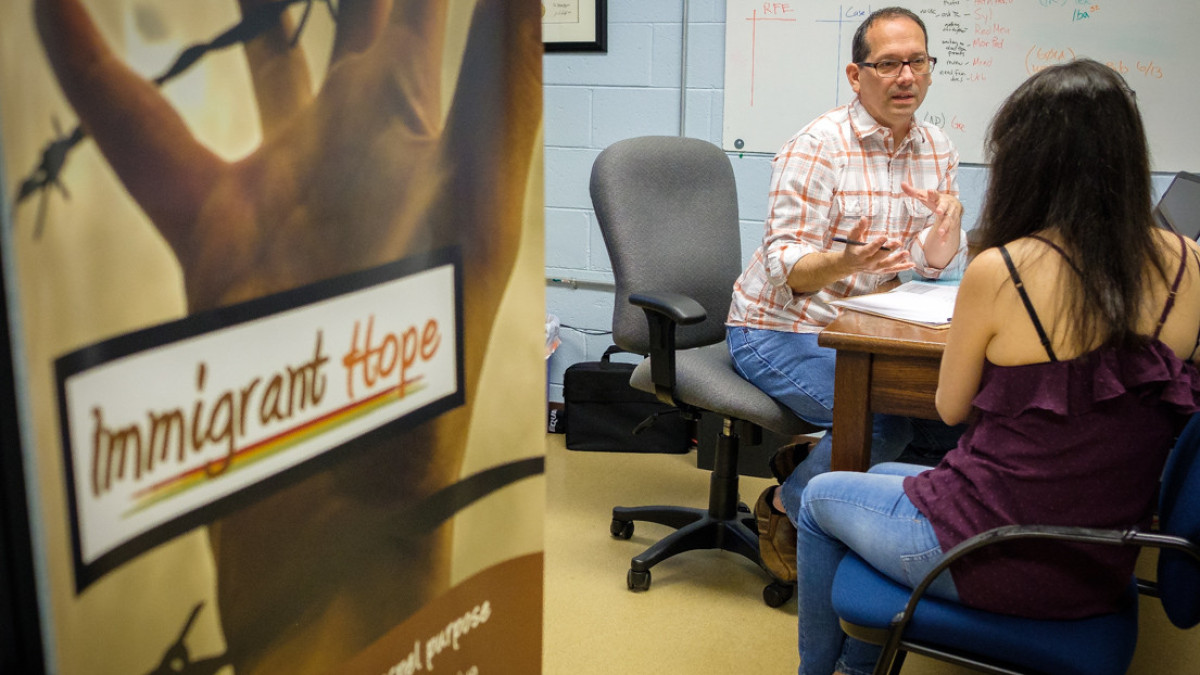 In the Church right now, the issue of immigration is one of the clearest and most compelling guideposts for steering us into a deeper, more biblical reflection of Christ.

Why do I believe that?

The entire second half of Matthew’s Gospel (starting at chapter 16) is the battle of dueling visions of the Messiah and His kingdom. On the one side is the Conquering Messiah of This World (envisioned by the Pharisees, Sadducees, priests, elders and scribes) and on the other is the Suffering Servant (voiced by Jesus and Isaiah).

The two visions are clearly seen in Jesus’ rebuke of Peter, who does not yet understand the nature of God’s kingdom. When Jesus tells the disciples that He must die and be raised, Peter famously tells him, “No.” Jesus responds: “Get behind me, Satan! You are a hindrance to me. For you are not setting your mind on the things of God, but on the things of man” (Matthew 16:21-23, English Standard Version).

Immigration and other ministries to the poor, marginalized and despised help keep the church focused on the suffering, resurrected servant and His kingdom. In addition to being clear, unequivocal mandates from His Word, they reveal where we, like Peter, have set our minds—as well as our hearts.

I fear that many of us who call ourselves “evangelical” are pursuing a conquering Messiah rather than Jesus and His kingdom.

Relocating my heart, my family and my church

Let us set our minds on the things of God so that we can follow Him to the people who need Him.

Our EFCA church has always had a commitment to reaching the world for Christ. In 2004 we began to make a shift toward the world at our doorstep, which opened our eyes to the imperatives of God’s Word to care for widows, orphans, immigrants and the poor.1

We started working in a local elementary school and an apartment-based after-school program. In short order we fell in love with the kids and families. They showed us more about what it means to love your neighbor than we ever imagined.

As a result, we relocated the church and my family to be in the neighborhood. Then 2008 happened.

The great recession was a game changer. In the history of the United States, whenever there is a recession there is an anti-immigrant backlash. And our neighbors—the kids and families the Lord had called us to love and serve—started to suffer. It caused a crisis in me: How are we going to respond as a church?

According to the United Nations Populations Fund, “the number of people living outside their country of birth is larger than at any other time in history. International migrants would now constitute the world’s fifth most populous country if they all lived in the same place.”

And Acts 17:26-27 says that God determines the exact times and boundaries of people’s lives so that they can find Him.

Was I going to be part of what God was doing?

Ministry to the marginalized and despised keep the church focused on the suffering servant and His kingdom.

To make a long story short, the Lord guided me to the EFCA’s Immigrant Hope ministry. They helped me set up a center out of our church (a designated space to meet confidentially with clients), and prepared me to be authorized by the U.S. Department of Justice as an “accredited representative” to do immigration legal work as a nonattorney.2

Over the past five years, I have experienced many sacred moments. Through this ministry, for example, we are able to go into the local children’s hospital and help foreign-born parents who have U.S. citizen children going through cancer, organ transplants and other serious medical problems.

One day I was finishing up the intake work with one mother while a nurse worked on her 2-week-old daughter, who has major heart defects. Another mother, whose 4-day-old son was a few doors down, was visiting my client. Before I could pray (we pray for everyone we work with), the visiting mother asked how a “good” God could allow her child to suffer like this.

We talked for a long time, and I was able to speak gently but honestly.3 She was a Christian who was understandably confused and hurting. After a moment of silence, she closed her eyes and said, “This makes sense to me” through her tears. Two weeks later, her son died.

We were able to help the client mom with the necessary paperwork, though, so that she could stay in the United States and take care of her child.

This story reminds me that ministry at the edges of society among despised people is not about happy endings. It’s about His presence. Taking people before the throne of grace. Showing them that the Lord of the universe is approachable and cares for them. We don’t control anything except being available and intentional about the gospel.

Thousands upon thousands of migrants are dying every day. People are scattered and hurting “sheep without a shepherd” (Matthew 9:36).4 It is both the great catastrophe of our time and the Church’s greatest opportunity to put the Suffering Servant they easily grasp (but do not understand) on display. Let us set our minds on the things of God so that we can follow Him to the people who need Him.

Read the next post in this series, "What If Mom Doesn't Come Home?" or return to the beginning of the series.

1
Zechariah 7:9-10 Matthew 25:38, Numbers 15:15-16, James 2:1.
2
Joining me from our church, Open Table Community (EFCA), is another accredited representative, families who open their homes to immigrants, others who volunteer and all who help with their invaluable financial support.
3
Read more about this story—and others—at the author’s blog.
4
The author says, “When we pray for the Lord to send workers into the harvest [the next verses in that passage, 37-38], we are praying for people to be active in ministries like Immigrant Hope.”