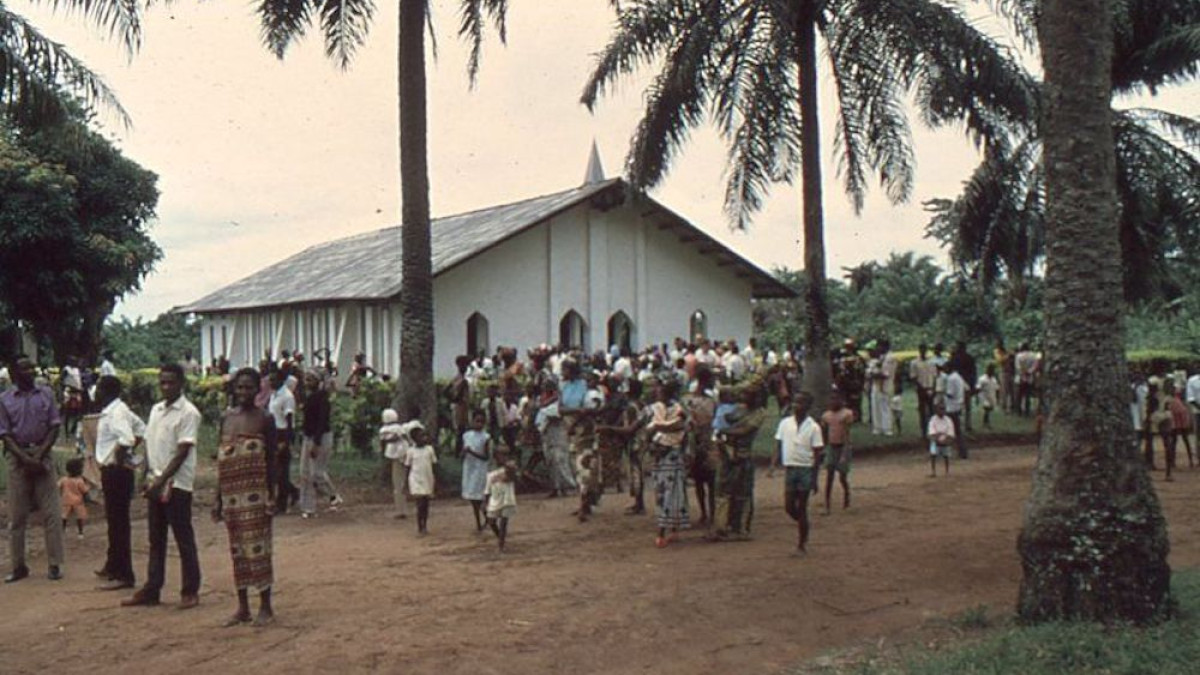 “Tito asili kokoma!” The words rang out all around Tandala on that September day in 1972: “Titus has arrived!”

Thousands of people had gathered for the big Jubilee celebration and lined the road as he arrived.  It had been fifty years since Titus Johnson first arrived in the Ubangi Province of Congo, the far northwestern corner of what was then known as the Belgian Congo, and later as the Republic of Zaire,  the largest country in central Africa.

My wife Annette and I were newer missionaries ourselves in Congo, having arrived in 1970, and we had not yet met Titus. We were working in the Tandala Hospital which he had helped to plan before its opening in 1955. Though we only knew a bit of Titus’s story, we were eager to participate in the big celebration, along with dozens of other missionaries and visitors.

But why the commotion? It was because Titus had found the fertile soil and planted the seeds for what would eventually become the CECU, the Free Church of Congo, which is celebrating its 100-year anniversary this year.

The story of Titus in Congo

In 1916, Titus Johnson enrolled in the Free Church School in Chicago (later known as Trinity) which met at Moody Bible Institute.

After graduation, Titus felt called to service in Africa. After arriving in eastern Congo, he received a letter from the Free Church Mission Board asking him to help them identify a mission field in Africa where they could serve. He began a seven-month trip on bike and on foot, traveling on walking trails toward the west side of Congo some 900 miles away. He actually traveled as far as Chad before returning to the Ubangi area, where he felt God was calling him, and the Free Church, to start work.

In the following years, new missionaries were sent to join him. Living at first in grass-thatched mud-wall huts, they began learning the language, understanding the culture and sharing the gospel. Missionary nurses cared for physical needs, some taught literacy and others trekked into the vast unreached areas of the Ubangi province, an area comparable to the state of Illinois in size, yet without roads or infrastructure. With at least 18 different tribal languages, work was often done in Lingala, a trade language many could understand.

God blessed the work of those early missionaries, and thousands came to know the Lord. Many learned to read God’s Word, national leaders and pastors were trained, and churches planted. Soon a Bible School was started followed by a higher-level Bible Institute. In 1935, the Evangelical Covenant Church, also seeking a field in Africa, joined in the work. Meanwhile, Titus returned to the U.S. and became a physician, opening a practice in Chicago, while making frequent trips back to Africa. He was involved in the planning for the new Tandala Hospital which opened its doors in 1955.

On that special day in 1972 when Titus came back to Tandala for the Jubilee, many knew of him, but only a few of the older African leaders knew him in person. Riding on the back of a pick-up truck, he arrived near the station and was given a ceremonial bike to walk into the station, reminiscent of the miles he had ridden by bike to the Ubangi, decades earlier.

As a young physician, I, along with my colleague Dr. Bill Colby, greatly appreciated the days we spent together: his counsel and advice as we made rounds together, did surgery and talked during the cool of the evening about our work, the culture and the way God had led each of us to the beautiful country of Congo.

God had called Annette and I to missions years before, during high school and our time at a Bible institute. As I was finishing medical school, we applied to the Free Church mission and were accepted for service in Congo. We arrived in 1970 and began caring for patients at the 140-bed Tandala Hospital as the only physician until Dr. Colby arrived a year later. This included surgery several days a week, visits to distant clinics, teaching in the nursing school and a good deal of administration too.

By 1997, the last resident missionaries had left the Ubangi...

Ministry in Congo was not limited to medical missions: missionaries worked in pastoral training, taught in the schools and provided agricultural training. They brought Bibles and other books to the newly-literate people and taught them how to read. All the while, the medical work expanded to many remote clinics in addition to the hospital.It was a delight to have Titus there with us those few days in 1972.The pastors and leaders of the church were thrilled to have time with him as well, sharing news of how it had grown to more than 400 local churches, their initiatives in training and outreach and the start of ministry outside the Ubangi. Sadly, seven months later that Titus went home to be with the Lord—but he left great memories and his legacy lives on today.

Through the work of hundreds of missionaries, the church grew and matured. Unfortunately, various political crises in the country over the years mandated several evacuations of the mission staff for safety. By 1997, the last resident missionaries had left the Ubangi, and now, for these last 25 years, we have watched, assisting from a distance, as the church grew and matured despite the many political and poverty issues they face.

A time to celebrate

This year is the centennial of the arrival of that first intrepid missionary in the Ubangi. The Free Church of Congo has grown exponentially, with well over 1,000 local churches, hundreds of thousands of believers and members and an active mission outreach themselves. They train all their own pastors in various schools, the hospital and medical work is entirely led by Congolese doctors and nurses and the church leadership is strong and advancing the gospel, including a missionary outreach far beyond the Ubangi.

In November of 2021, over a thousand pastors and church leaders gathered in Gemena to begin a year-long celebration. Interestingly, because almost all the EFCA ReachGlobal missionaries left Congo for retirement or for redeployment some twenty years ago, many of the younger generation in Congo had never met a missionary.

Within the EFCA, we too have seen great growth over the years. Often, it is easier to celebrate the work at our front door; but we shouldn’t miss this opportunity to celebrate the 100th anniversary of the gospel work—and decades of partnership—between the EFCA and the CECU. This year, we hope to bring the EFCA into celebration of all that God has done in Congo—starting with one young man who traversed the country on bicycle.