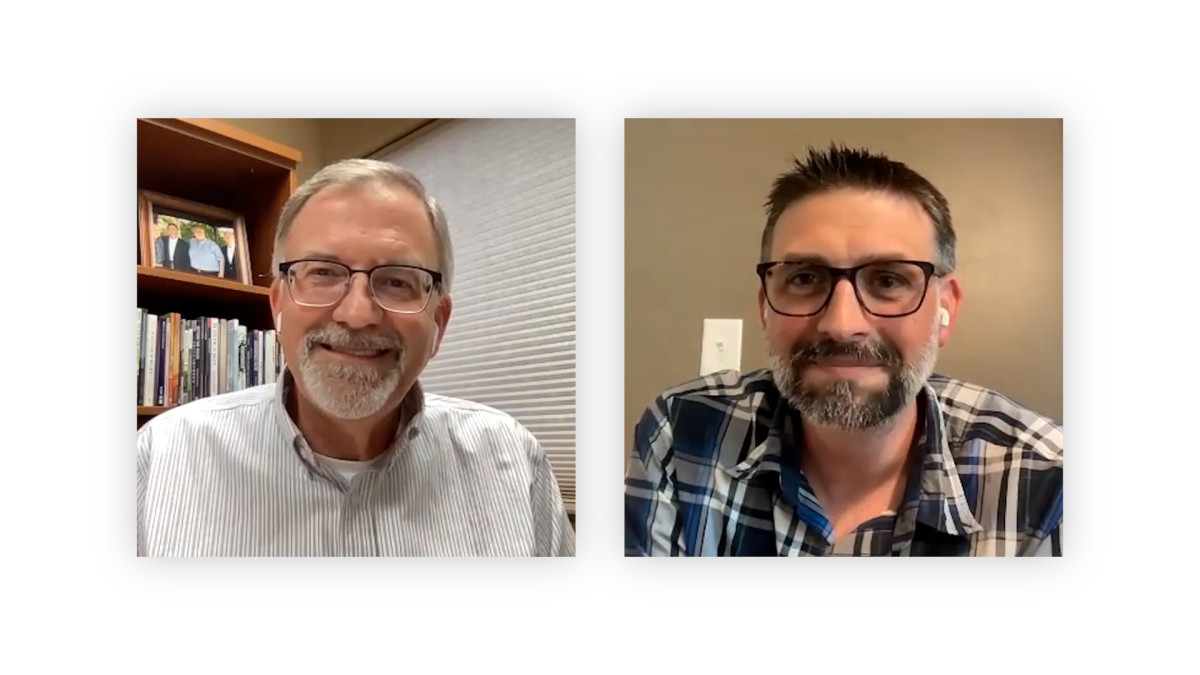 Last month, I introduced five ministry motivators to articulate the things that shape the ministries in EFCA churches, bring us into closer alignment with the heart of God, and encourage pastors, missionaries and church leaders as we pursue our mission to glorify God by multiplying transformational churches among all people.

One of those motivators is the “Reality of the Battle.” When we pursue the mission God has set before us, we enter a spiritual battle, not against culture, the world or our neighbor but against the Enemy. The Enemy is doing everything to distract us from our mission. As I talk to district leaders, missionaries and pastors, I hear about significant challenges related to disciplemaking in an era where many voices vie for attention. This raises an important question:

How do we disciple the people of God in contexts that often distract us from keeping our eyes on Jesus?

To explore this topic further, I invited John Biegel, who served nine years as a pastor at Riverstone Church (EFCA) and is now transitioning to the role of senior pastor of Cornerstone Evangelical Free Church in Annandale, Virginia, to share his insight. Rather than keep pace with the world, he points us toward a counter-cultural, deliberate discipleship; an effective approach in the Church since the Book of Acts. I invite you to read his article below and watch our interview, where we unpack how we can see this discipleship lived out in the local church.

If I had to pick a single word to describe our world, it would be “frantic.” Frantic means “marked by fast and nervous, disordered or anxiety-driven activity.” I’d say that fits.

We are constantly bombarded by information and opinions on things as mundane as fabric softener, as momentous as abortion legislation and everything in between. This information inundation is often portrayed as urgent and critical, demanding our immediate attention and response.

If we were to pull back the cosmic curtain, we would see that this is nothing less than a sophisticated propaganda campaign used by the Deceiver to sow discord, fear and suspicion. It is a part of the spiritual battle being waged for the hearts of people. And this battle is not merely for the hearts of unbelievers, those whose minds have been blinded “so that they cannot see the light of the gospel that displays the glory of Christ” (2 Cor 4:4). It is also a battle for the hearts and minds of believers—who may be “led astray from sincere and pure devotion to Christ” (2 Cor 11:3).

The battle is real. And the temptation we face in ministry is to fight this battle on the world’s terms.

To compete with the world for people’s attention, we feel the need to pump out as much content with the same quality and frequency as media outlets, app developers and tech companies. We think we can combat such an information overload and clickbait communication by simply providing a Christian version of it.

For example, because popular organizations and influencers release social media posts and compelling content multiple times every day, we may begin to think that unless our churches follow suit, we run the risk of losing the battle for influence. And so, we begin to devote time and energy to the creation and curation of content that, while it may communicate things that are good and true, inevitably joins the cacophony of competing voices.

Here’s another example. Because media outlets bill just about everything as breaking news that promises to change your life if you’d only tune in, we begin to feel the need to promote everything our churches are doing as radically and instantly transformative. The next study, small group, conference or ministry event, has to be a home run—so we reason—or people won’t come back and lives won’t be transformed. We are lured into the trap of what Zack Eswine, author of The Imperfect Pastor, pointedly calls doing "large things famously and fast” (and I would add “constantly” as well).

Although we mean well, our attempt to out-pace and out-distract competing influences actually results in a frantic, divided, exhausted, anxious discipleship that mirrors the frantic, divided, exhausted, anxious world we live in. Like a game of ministry whack-a-mole, there are always more distracting, divisive, and diabolical influences confronting God’s people. Ministry too becomes frantic and exhausted.

How do we compete? We can’t. And, I would argue, we shouldn’t.

We may think people won’t pay attention to us (or more importantly to Christ) unless we can skillfully mimic what captures their attention in the wider culture. But what if that’s not the way that God designed spiritual formation to occur? What if instead of trying to compete with the world’s weapons on the world’s ground, we fight with the weapons God has given the church on the ground of His choosing? What if instead of trying to speed up ministry to match the frantic pace and attitude of the world, we intentionally slow down?

Notice what we confess together in article 8 of our Statement of Faith:

“With God’s Word, the Spirit’s power, and fervent prayer in Christ’s name, we are to combat the spiritual forces of evil.”

Here we have not only a portion of our field orders as Christians—"we are to combat the spiritual forces of evil”—but also a means by which those orders are to be carried out: God’s Word, the Spirit’s power and fervent prayer.

On the surface this might seem like disappointing equipment. The world’s constant offensive against Christianity can feel like an armored onslaught. These weapons don’t seem like they’ll be enough. They seem, well, too ordinary. At first, it can feel like trying to fight tanks with slingshots. It makes us uncomfortable because it can seem like such a counterintuitive strategy.

But consider Paul’s words in 2 Corinthians 10:

“For though we live in the world, we do not wage war as the world does. The weapons we fight with are not the weapons of the world. On the contrary, they have divine power to demolish strongholds” (2 Cor 10:3–4).

Paul tells us that we “do not wage war as the world does” and that we do not fight with the world’s weapons. A spiritual battle requires spiritual weapons that have “divine power,” something the “weapons of the world” completely lack, despite appearances to the contrary. The more we adopt worldly strategies, which may have the appearance of wisdom, the less effective the Church will be in its battle for the hearts and minds of people.

The difference between the world’s weapons and the weapons God has provided for the church is like the difference between avalanches and glaciers. Avalanches are fast, loud and impressive, but ultimately do relatively little to permanently affect the landscape. Glaciers, on the other hand are slow, deliberate and generally unimpressive, and yet are deeply and permanently formative. Avalanches move dirt. Glaciers cut canyons.

While the world continues its frantic, avalanche-like bid for peoples’ attention through breaking-news chyrons and relentless notifications, constantly moving from one supposedly urgent issue to another, we need a patient commitment to practices as a church that root and form people in the gospel over the long haul. We need more glacier-like ministry.

The more we adopt worldly strategies, which may have the appearance of wisdom, the less effective the church will be in its battle for the hearts and minds of people.

And so perhaps the way for us to best engage in this war, in the Spirit’s power, is what has been called the ordinary means of grace: the regular preaching of the Word, corporate worship, prayer, fellowship, baptism and the Lord’s Supper, things that have characterized the Church since its inception. What appears ordinary to us is actually quite extraordinary, because it's how God, in His grace, has appointed to make and mature disciples of Jesus.

As the early church gathered in Jerusalem, we see that what they devoted themselves to were remarkably ordinary: “...the apostles’ teaching, and to fellowship, to the breaking of bread, and to prayer” (Acts 2:42). This is the arsenal God has entrusted to us: the Word of God, the fellowship of the local church, the ordinances and prayer. And this was not part of a big one-time event. Rather, the Christians “were continually devoting themselves” to these things (Acts 2:42 NASB). That speaks of consistency, commitment and patience in their practice.

Slow? Yes. Ordinary? Yes. But with extraordinary results: “...And the Lord added to their number daily those who were being saved” (Acts 2:47). A study of the book of Acts would yield the same results. The early church, living as a minority in a hostile world, grew and was strengthened in this way: the Word of God, applied by the Spirit of God, through the people of God, over time.

Word, Spirit, People, Time. That is the Bible’s formula for growth in spiritual maturity. That’s our philosophy of ministry.

This ministry is simple, ordinary, deliberate and, in the end, lasting. A commitment to ministry with the ordinary means of grace may at first appear to be ineffective, but over time will bear fruit, and fruit that will remain, because it is those means that by the Spirit have “divine power.”

To quote Zack Eswine again, while contemporary wisdom values “large things in famous ways as fast and as efficiently as you can,” gospel ministry is actually about doing “small, mostly overlooked things, over a long period of time,” using the means imbued with God's divine power to give growth.

So, are you willing to “combat the spiritual forces of evil” with slow, patient, intentional, deliberate ministry—ministry that forms people like glaciers, not avalanches? It runs counter to just about every impulse of our human wisdom. And perhaps that’s the point. It reminds us that “the surpassing power” to make disciples “is from God and not from us” (2 Cor 4:7).