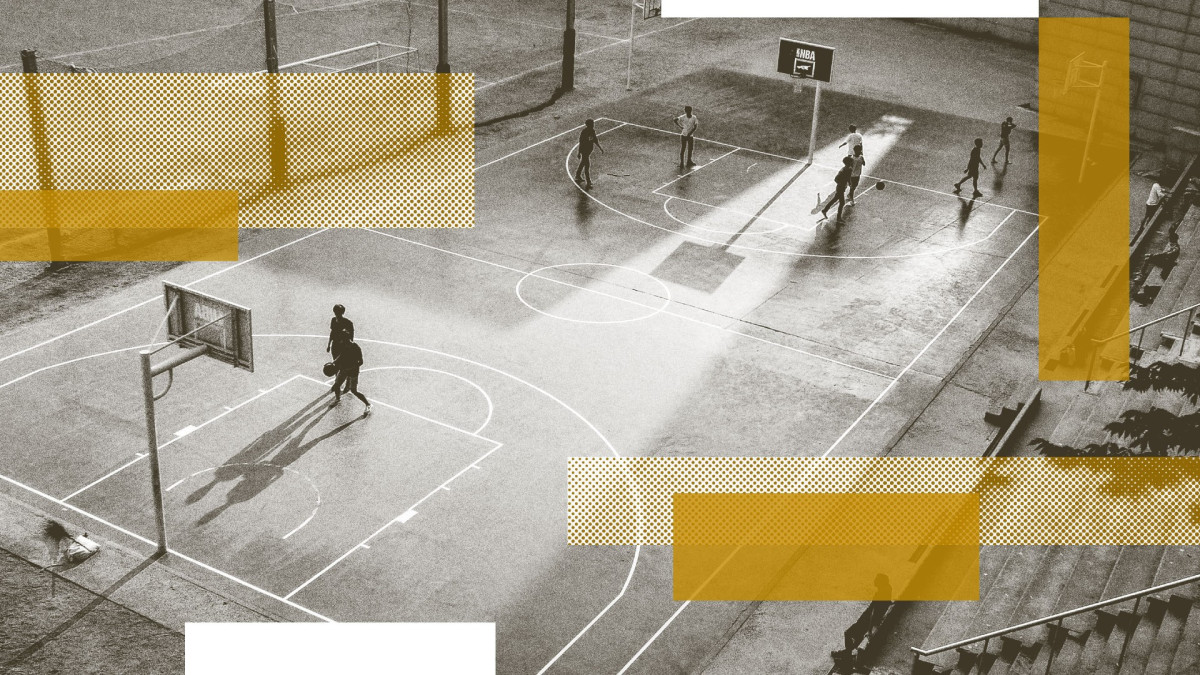 Tyrone Christoph knew all about the Church as a young kid growing up in New Orleans, Louisiana, but he wanted nothing to do with it. He saw too much hypocrisy, people focused more on words and not enough on deeds. But when two EFCA pastors visited his elementary school to play a game they called “Challenge Circle,” he was hooked. That first encounter with Urban Impact radically changed the course of his life.

Urban Impact was founded by Glen Schrieber, District Superintendent of EFCA Southeast, in 1989, with pastor John Gerhardt joining the ministry in 1991. As a small team, they shared the gospel to the youth through sports in a neighborhood teeming with violence, poverty, broken homes, poor education and drug use. They raced against time to serve youth and cast a vision for hope. Tyrone was one of those students.

But when two EFCA pastors visited his elementary school to play a game they called “Challenge Circle,” he was hooked. That first encounter with Urban Impact radically changed the course of his life.

When he was 12 years old, Tyrone sat on his porch in his housing development when John invited him to a Christian youth camp in Missouri. Tyrone jumped at the chance, hearing that it was a lot of fun to go.

“It's one of those camps where if you've never heard about how much God loves you and what Jesus has done for you, you’ll know by the end of the week,” Tyrone said.

Still, he kept Christianity and church at arm's length and didn’t believe what they said; he just wanted to have fun. But God wasn’t done with him. After their group returned to New Orleans, John challenged them to keep coming to Urban Impact gatherings and then they might have an opportunity to return to the camp. Tyrone wanted to return, and since Urban Impact didn’t feel like church, he came to their events.

As Urban Impact’s ministry grew with many students attending, the parents of those students came to Christ as well. With families growing closer to Jesus, they needed a church to call home. So, Glen and John planted Castle Rock Community Church with the Urban Impact ministry.

At the time, the youth groups and Bible studies were hosted at Glen’s house, a place where Tyrone saw Christians living out their faith authentically. He developed friendships with Glen’s sons and was impacted by how they acted outside of Bible study.

“It was the first time in my life,” Tyrone said, “where I finally got to see people who didn’t just talk about Jesus, they lived it.”

The next summer, Tyrone returned to the youth camp, but this time, he came home having given his life to Christ. During those early years, though, from 13 to 16, he realized he became exactly what he didn’t want to become—a hypocrite. Outside of church, he wasn’t living in a way that he felt would be honoring to God. He was down and tired of being two different people.

“I remember praying by myself, saying, ‘God, just show me how to live my life for you.’ And my second prayer was, ‘God, I need your help with school because if I don’t get on track, then I'm not going to finish.’”

“It was the first time in my life,” Tyrone said, “where I finally got to see people who didn’t just talk about Jesus, they lived it.”

A few weeks after praying, he received notice that he was expelled from school for missing too many days. He went to John and Glen and told them about the expulsion. He said he would try to talk to the school and ask to be let back in. The school wouldn’t budge and he was left with few options, one involving attending a school known for having a rough environment.

To help him get back on track, Glen and his wife Karen offered to homeschool Tyrone. Every day they read the Bible and learned to develop a love for the Word of God. On one of the first days, he read Galatians 2:20:

“I have been crucified with Christ and I no longer live, but Christ lives in me. The life I now live in the body, I live by faith in the Son of God, who loved me and gave himself for me.”

“When I read that verse, it just rocked me. I felt God telling me, ‘You wanted to know how to live your life, this is it. Stop doing what you want to do, stop living how you want to live and trust Me with your life,’” he said.

He worked three years to catch up on school and earned his GED; in the meantime, he volunteered at Urban Impact.

After graduation, Tyrone dreamed of going to college, and he liked working with his hands. So, he pursued work as an auto technician and started taking classes at a college. When the time came for him to pick a dealership for his internship, he looked over the dealerships available, but struggled to choose. He tabled the decision for later and went to Urban Impact to volunteer and pray over it.

“God, I don’t know why it’s so hard for me to pick [a dealership],” he prayed. Then, a sudden thought came to him, and he continued, “I think I would like to work with Urban Impact.”

“When I read that verse, it just rocked me. I felt God telling me, ‘You wanted to know how to live your life, this is it. Stop doing what you want to do, stop living how you want to live and trust Me with your life,’” he said.

The very next day he came to volunteer, Glen approached him about coming on staff. He said, “I just prayed about that last night.”

The first year, in 2000, he served by doing whatever was needed, before he was promoted to Junior High Youth Director in 2001. He served in that role until Hurricane Katrina struck New Orleans in 2005. During a period of evacuation in Arkansas, Tyrone suddenly realized that he was burnt out doing youth ministry. Though he worked tirelessly to prepare Bible studies and serve the students, he realized he wasn’t spending enough time with God.

Katrina and the inevitable evacuation proved to be a point of reckoning, reflection and renewal for him. He found he had more free time to spend with God and His Word. He also married his wife who he met while volunteering at Urban Impact. Eventually, John returned to Urban Impact to assess the damage and all signs pointed to a return to ministry. Tyrone had personal doubts.

“They needed to push up the timeline for me to get back because teams were coming to help us rebuild, but in that moment I struggled. I didn’t want to go back so soon,” he said.

He prayed with his wife about it, but he felt in his heart he didn’t want to go back to do youth ministry anymore. Still, he returned to help with the rebuilding process.

A renewed conviction to lead

During the reconstruction process, Tyrone learned that a young student he knew had been killed. As he sat at his funeral, his heart pounded. No one should have to end up like this. They don’t have to end up in a coffin or in jail.

The very next day he came to volunteer, Glen approached him about coming on staff. He said, “I just prayed about that last night.”

He reflected on all the people God put in his life to walk alongside him and lead him in the right direction. Then, he felt like God was telling him, “This is why I want you to do youth ministry.”

Afterward, he spent more time reflecting, writing in his notebook about how he wants to pursue youth ministry differently to avoid burnout. He didn’t tell anyone about it and kept it to himself. Two weeks later, John called him into his office and asked if he wanted to be the full-time youth pastor over both high school and junior high ministry. Tyrone, remembering his commitment to God, jumped at the chance.

“Hold on, slow down,” John said. “Why don’t you go home and write out your goals.”

“I’ve already been doing that,” he said.

The next day, he showed John everything he had worked on weeks before, and he became Castle Rock Community Church and Urban Impact’s youth pastor.

A safe place to gather

According to Tyrone, crime continues to plague New Orleans, with car break-ins, carjackings and burglaries. With escalating crime, Urban Impact’s goal is to create a neighborhood where kids can ride their bikes safely. They hope their ministry will be a safe place to gather.

He reflected on all the people God put in his life to walk alongside him and lead him in the right direction. Then, he felt like God was telling him, “This is why I want you to do youth ministry.”

To do that, they have several ministry programs for students. Through their middle school and high school Bible studies, they help students grow and mature in their relationship with Christ through Bible reading, Scripture memorization, prayer and team activities. On Saturday, they host Open Court, a time for students to come and enjoy being kids by playing basketball and other games. Roughly 65 students attend every week.

Outside of regular activities, Tyrone spends time discipling high school students and the young adults volunteering at Urban Impact. Tyrone wants his students to see what’s he’s like outside of Bible study, just like he experienced with John and Glen when he was a student. He invites them over to his house to see how he, his wife and his kids interact. They spend time in prayer, digging into the Word and holding each other accountable.

“The biggest impact on my life,” Tyrone said, “was seeing other people pour into me. One of my goals is for my students to ask ‘How can God use me now? How can God use me to pour into others?’ And remind them that the reason why we do what we do is to make an impact by introducing people to Jesus.”

Tyrone continues to lead as the youth pastor at Urban Impact, and also serves as the Mosaic director, a role focused on including all people, on the EFCA Challenge Conference team.