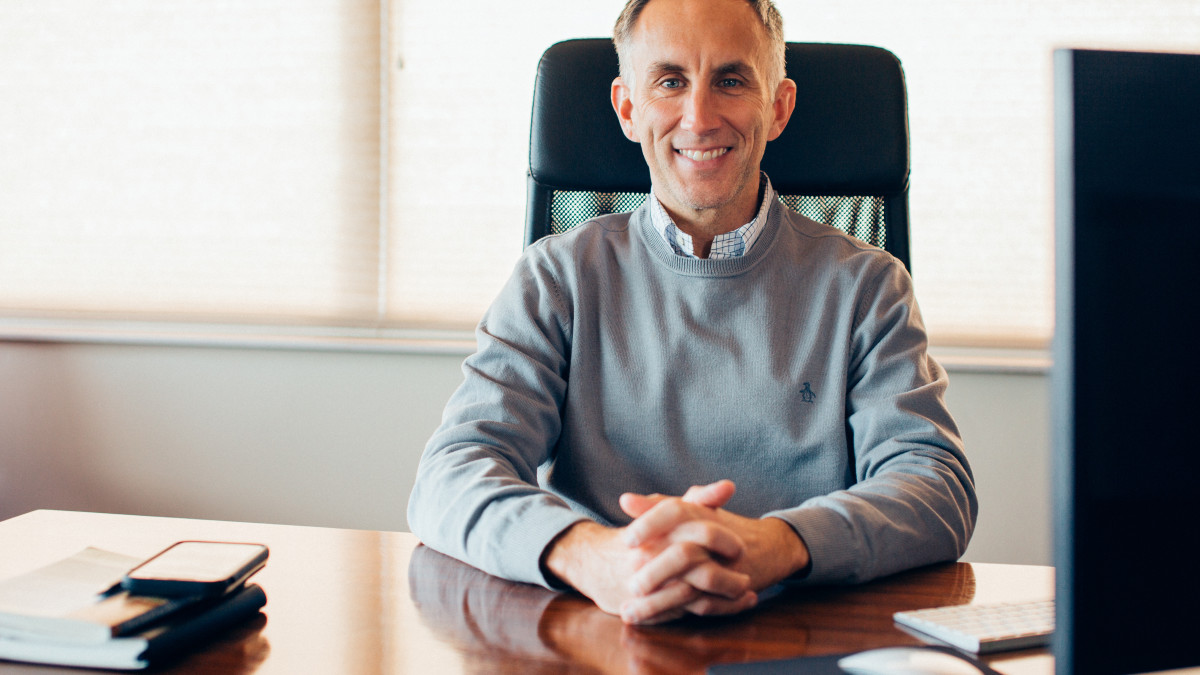 When I first started thinking about candidates to fill our recently created role of executive vice president of national ministries, a few characteristics came to mind:

I’m so excited to work with Eddie as he brings his Christ-like leadership and dedication for disciplemaking to the EFCA.

As we began looking across the country for the right person, one name kept rising to the top in all of these areas of qualification: Eddie Cole. Eddie and his wife, Jessica, led a revitalization effort of an EFCA church in Staten Island, New York (Salem Church); he’d significantly impacted that church through his leadership and preaching; and he had a passion for the Free Church (he served both as the superintendent of the Eastern District Association and on the EFCA Board of Directors).

Having worked with Eddie on the Board, I’d seen both his strategic mind and the great relationship he’d fostered with the other 16 district superintendents. I’d even traveled with him and Jessica to visit some of our Eastern District churches and saw firsthand his heart for evangelism, disciplemaking, church planting and coming alongside EFCA pastors.

I was actually on the phone with Eddie about a different matter when I told him, after explaining the new role we were creating, “If you didn’t already have a job, I’d hire you.” It got really quiet on the other end of the phone, then Eddie said, “Jessica and I have been praying about what’s next for us. It may well be here (with the Eastern District), what I’m doing now; it may be something else. We’re just sensing God may have something new for us.” In November, Eddie began his role at the EFCA national office as executive vice president of national ministries.

I’m so excited to work with Eddie as he brings his Christ-like leadership and dedication for disciplemaking to the EFCA. Eddie has a unique ability to 1) work with people, 2) establish clarity on what needs to be accomplished and 3) move vision forward to get things done, all of which, I think, will serve him greatly in this role.

In light of this, I asked Eddie several questions—about himself and his ministry—so you can get to know him better and why he’s a great fit for his new position with the EFCA.

Q: How do you plan to serve our local churches, pastors and congregants in this role?

Eddie: Truthfully, I’m only a couple months into this role and about 95 percent of my time thus far has been learning the administrative structure that allows the EFCA to operate, so it’s still a little premature to roll out a clear vision.

Nevertheless, here’s what I’m sure of at this point: I envision working with national ministry leaders to best serve the 17 EFCA district superintendents, who will then provide the best care and leadership possible for local church leaders. I want to equip EFCA leaders to be healthy, connected in community and resourced for ministry growth. In making this our aim, we will work together—as “one EFCA,” as you often say—to help fill the world with the goodness and glory of God by proclaiming the gospel through word and deed.

Q: You were both a district superintendent and local church pastor. Tell us about your love, passion and desire to serve both the local church and our districts.

Eddie: God’s plan to accomplish His mission in the world is primarily through His Church. My core conviction is that the local church is the best hope communities have at experiencing the power of God. Because of this, helping church leaders succeed in their lives and ministries is a work worth giving my energy and effort to for the rest of my life.

As a district superintendent, our team focused on three primary things—helping leaders live well, lead well and multiply. Pastors seemed to appreciate that clarity, and it energized me and our Eastern District team. We were very relational but also intentional in forward-thinking our approach to ministry, and it bore some really encouraging fruit. I plan to approach this role in much the same way—relationally and intentionally forward.

Q: Years ago, when you made the transition from pastor to district superintendent, you mentioned God had prepared your family in ways you could never have expected. How so?

Eddie: Jessica and I have had a vast array of ministry experiences. We’ve done itinerant evangelism, youth ministry, various kinds of mission efforts, conferences and retreats, as well as pastoral ministry. We’ve served in a variety of contexts—serving in a smaller, rural church setting, on staff at a couple of mega-church ministries in medium-sized towns and led a wonderful, historic EFCA church for 13 years in New York City.

To add a little more to how God has prepared us, we have experience with both church planting and revitalization. Although we’ve never been church “planters,” we’ve helped plant multiple churches and led a revitalization effort at a 99-year-old ethnic Norwegian church that became a ministry where more than 30 nationalities were represented every Sunday. And, as a district superintendent, I was able to oversee the re-launching of our district’s church multiplication team.

On our best days, we are His disciples and children first, leaders and ministers second.

Through our experiences, we’ve grown to love and even adore the beauty that’s found in the diversity of God’s Church. We’ve experienced ethnic, generational and socio-economic diversity in our journey of service, and we’ve been gifted with the opportunity to worship and serve in places with various worship expressions. We love it. God is a brilliant artist—His creativity is incomprehensible. I had a professor who used to tell his students that God uses all kinds of churches to reach all kinds of people. We’ve been blessed to see the truth in that statement.

Q: From Tennessee to Alabama to Staten Island and now to Minnesota, you and your family have moved quite a bit. How have you and Jessica kept open hands to God's leading in your lives and what has that taught you about life as a disciple of Jesus?

Eddie: We just try to stay close to Christ as His children and followers. We fight hard to remember that before we are leaders, we are His disciples. The primary posture we try to live with is as His children. On our best days, we are His disciples and children first, leaders and ministers second. We want to walk with Him daily, being led by His Spirit. Ministry is supposed to flow out of that.

We really didn’t envision leaving the South or working in a denominational role, but here we are. It’s been a surprising journey, to say it mildly. You mention moving—we actually don’t enjoy moving, but it seems to us like God has made His will clear each step of the way. When you believe God has called you to do something, as we do, the only right response is: “Yes.”

Each season has brought trial and triumph, and in each, God has given us joy. Amazingly, He’s even given us the gift of seeing good fruit in each place we’ve served. I believe it’s through our commitment to faithfulness and growth in each place of ministry that He’s shaped us for what was to come. As imperfect as I’ve been, He’s been that gracious and more.

Q: You met Christ as a junior studying political science at East Tennessee State University. How did that lead to your call to ministry?

God made it clear that my life was to be spent as a minister of the Word.

Eddie: Once I met Christ, I realized most of my friends and many in my family were living apart from the hope of Christ. That awareness changed me immediately. I had to share Christ with people, so I began sharing what I knew—however rudimentary it was and however awkwardly I did it.

I was a pretty happy political science major up until that point, but I got so distracted with thinking about the Word and how to tell people about the grace Jesus offered, I began to lose interest in what I was studying. After struggling like this for several months, I finally came to a point where I had to decide what to do. Through seasons of intense prayer, along with the counsel of older believers and messages given to me from different means, God made it clear that my life was to be spent as a minister of the Word. I surrendered my plans for His. While I wasn’t sure what it would look like, I knew the rest of my life would be spent working toward the salvation of the lost and building God’s Church.

Q: Who has been alongside you in this journey of faith?

Eddie: Wow, where do I even begin trying to answer that? I’m a blessed man. For the last 23 years, I’ve been walking alongside my wife, Jessica Van Cleave Cole. She’s amazing. There’s no way I could’ve had a better wife. We tell people all the time that we’re a “one flesh” ministry because we’re on this journey together.

We have a daughter, Madison. Her very existence has made me a better man and a more compassionate, pure-hearted and committed pastor and leader. She’s married to a great guy (Doug), and we look forward to what God has for them.

My parents have prayed for and supported me every step of my journey. That’s been huge for me to have their presence, encouragement and prayers. My brothers and in-laws have also been incredible.

It should also be said that I was part of an absolutely amazing church family to start my walk of faith. I had a pastor and several leaders that took me in to do life with them. They taught me to pray, memorize scripture, give generously and serve Jesus with joy. They did what Paul did with his disciples—they let me watch the way they live as well as listen to what they taught. In other words, they didn’t just teach me; they trained me.

I also had a great time in college and seminary, where I was surrounded by people who believed in me and challenged me. I was gifted with an amazing foundation to build a life and ministry upon.

Over the years, I’ve had the privilege to serve with so many good, gracious believers in local churches. There’s no perfect church, but I’ve received a lot of love and support from people who won’t know how much they’ve meant to me until we get to heaven. Many people, whose faces and names are crystal clear in my mind, have no idea how they have impacted me and encouraged me forward.