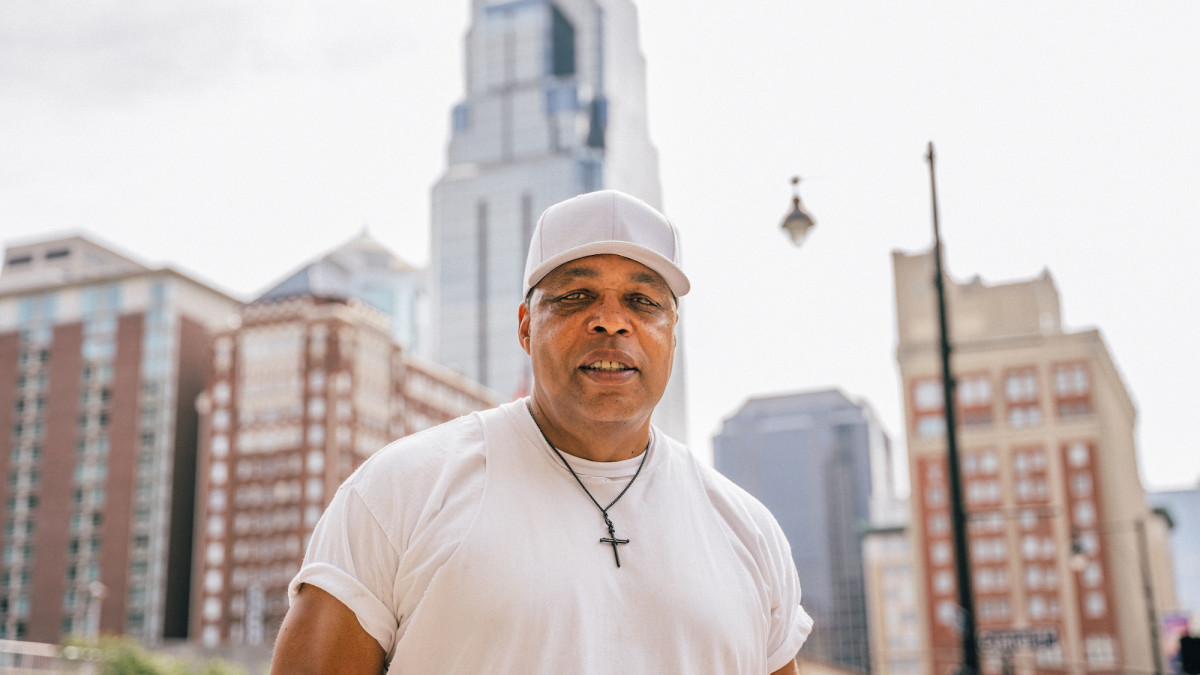 Oh man, I'm a preacher's kid. I grew up in the church, but never really understood God. Because when my dad left when I was nine, I basically just traveled. Just wandering. I didn't even know my identity. I got lost in me; I imprisoned me, and I didn't know how to get out of that. So I watched people drinking and drugging, and I got hooked. And then I made a career out of that, so to speak. But when I got so induced with that, it caused me to look out, and I wanted out of that lifestyle. For the very first time in my life, I prayed to God; even though I was going to church all that time when I was a kid, I never prayed.

After that prayer, five years later, He came into a crack house and got me out. I gave my life to Christ at 1:30 in the morning on February 16, 1993. I came out of that lifestyle of drugs and alcohol, pimping, drug home invasion, burglary, all that kind of stuff. I wanted to commit suicide. I wanted to die. And He got me. So I went out and basically just became a drug counselor. Just to help people out. I came back into the church, and I had a call. So from that point on, I've been pastoring and preaching for almost 27 years.

I was at Calvary Seminary in Harrisonville, Missouri and told my counselor that God put a calling on my life to plant a church. He hooked me up with the EFCA Assistant District Superintendent of the Midwest district, who told me about the Free Church. They set me up in a boot camp, and we were on board ever since then. So we planted a church called Bridge of Hope Community Church in Kansas City, Kansas.

When you see a person come from darkness to the light, you see transformation, but also you see the pain and the joy all at once.

We have transitional housing; we have a food pantry and all that kind of stuff. But every ministry we do is connected to the gospel. They’re well-fed, well-clothed people going straight to hell. And so we want to be able to do what Jesus did. Jesus took care of peoples’ needs, but He exposed who He was. So our goal is to take care of those needs, but also expose who Jesus is, and to help them to identify with it.

80% of people in Bridge of Hope come off the street. And so God has blessed us to be able to evangelize them, to help them grow and disciple them. And so from that perspective, we see people change their lives in the community. A lot of people we deal with are in transit, because they're homeless. A lot of times people think homeless people are from that city; they're not. At least 60 to 70% of them are not from that city. As we have been blessed by God to disciple them, after a year or two, they say, “Well, pastor, I want to go home.” And so I always think their home is probably across the water or something like that. But, no, their home is in Philadelphia; their home is in Dallas; their home is in St. Louis. And so we help them to get back to where they go. And I will call a pastor that I know that are in the Free Church to receive them, because they want to be a part of a Free Church based on the doctrine that we preach and teach.

When you see a person come from darkness to the light, you see transformation, but also you see the pain and the joy all at once. You see the freedom that they're experiencing from addiction, from homelessness, from unemployment, from being disregarded and not being valued. You see when people are loved, how much they are drawn to that love and how that love transcends their whole perspective on what love is. So we see God just affecting their hearts, and we see people with a desire to become followers of Christ. They're serving. They get jobs. They get married. They become fathers again. But also we have people going in and out because of the lifestyle. It's hard for some people, and it takes a while for some people. But we're very patient, because we understand it because we came from that background ourselves.

Pray for our leadership. Pray for our energy, for our commitment to God, that we can continue to be the lights He wants us to be in that community, and that we don't waver and we stand strong and continue to have partnerships.