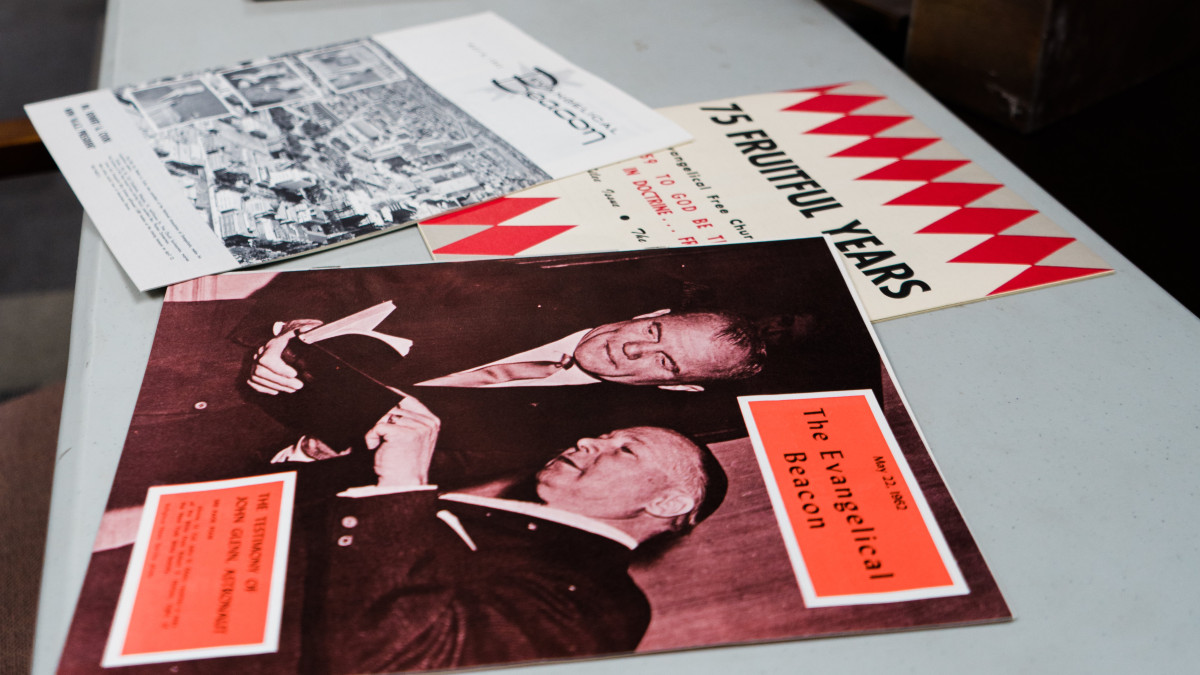 As the archivist for the EFCA, I enjoy finding treasures in our files. A couple of years ago, I discovered a copy of the Evangelical Beacon from 1962 that described the completion of our new EFCA National Office in Richfield, Minnesota. It was a beautiful building, but what caught my attention was the mention that when they laid the cornerstone for the building, a “Cornerstone Box” was inserted with a number of historic items—essentially, a time capsule.

In 1991, the EFCA moved to our present building in Bloomington, Minnesota, and sold the Richfield building to a sister ministry, who, in turn, later sold it to a realty group. But apparently the contents of the Cornerstone Box were never removed.

Even though the churches were scattered, [it] was a uniting force for the denomination.

President Kevin Kompelien encouraged me to see if we could access this box, even though there was no predetermined time that it could be opened. After many calls and letters, we got permission from the present owners to remove the cornerstone and access the box. Finally, on October 1, 2021, sixty years after the ground was broken for the building, we were privileged to cut the mortar and remove the box.

When we returned to the archives at the EFCA office, we discovered the contents of the box: a King James Version Bible, EFCA documents of various kinds and four historic Evangelical Beacons all in mint condition.

From 1850 to the 1920s, there was a great wave of immigration—some 1.3 million people migrated from Sweden to the United States. Times were difficult in Sweden and there was promise of good land for farming, thanks to the Homestead Act of 1862, and industry jobs in America.

Those early settlers spread out from coast to coast, but many found their new home in the Midwest. They started farms in the rural areas, building communities where they maintained their language, customs and faith. They started churches that were free from the control the government had over religion in their homeland. Swedish-language newspapers began to appear across the region and provided a deeper connectedness for the communities. Though many were secular, the Chicago-Bladet, published by John Martenson, was an exception—it eventually became the unofficial publication of the Swedish Evangelical Free Church.

Even though the churches were scattered, the Chicago-Bladet was a uniting force for the denomination.

[L]et's...continue communicating His love for a lost world while uniting our churches and people in new ways for this new era.

As time went on, the second- and third-generations of those Swedish immigrants were learning English in school and many never became fluent in Swedish.

In 1921, a young leader in the denomination, Roy Thompson, was asked to edit the Young People’s Messenger, a quarterly publication in English for the younger generation. It continued until 1926, when it merged with the Chicago-Bladet. Most churches were adopting English as their primary language by this point, and a new publication for the whole denomination in English was needed.

Thus, the Evangelical Beacon was born, published for the first time on October 6, 1931, ninety years ago this month. Starting as a weekly newsprint publication, its circulation grew rapidly and it moved to a magazine format. It grew from 8 to 32 pages, gradually using color and, eventually, extensive graphics and photos. Each editor left a distinct imprint on the magazine, making changes to modernize the publication.

The circulation grew progressively over the years, especially using plans that allowed churches to subscribe for each family. By the 1950s, well over 12,000 people subscribed to the publication. By 1996, it was almost 30,000.

The Beacon included news articles about the denomination, editorials on important topics, news of many of the individual churches and districts, articles about the missionaries of the Free Church mission (EFCM) and their work, a Young People’s page, the Women’s Ministries page and news of our schools (Trinity, and the earlier Free Church schools).

Looking to the future

The Beacon ended hard-copy publication in 2003 and transitioned gradually to an online publication called EFCA Today, and more recently the EFCA Update and the EFCA Blog, intentionally serving our pastors and church leaders. Though the method of communication has changed with the times, we celebrate the way God continues to use our denomination publications in wonderful ways to unite churches, encourage growth and church multiplication, encourage enrollment in our schools, recruit missionaries for our world-wide outreach and share stories of the ways that God is moving in our movement.

As we celebrate this 90th anniversary of the Evangelical Beacon, let’s give praise to God for His faithfulness to the EFCA over these many decades, and recommit ourselves to to finding ways to continue communicating His love for a lost world while uniting our churches and people in new ways for this new era.