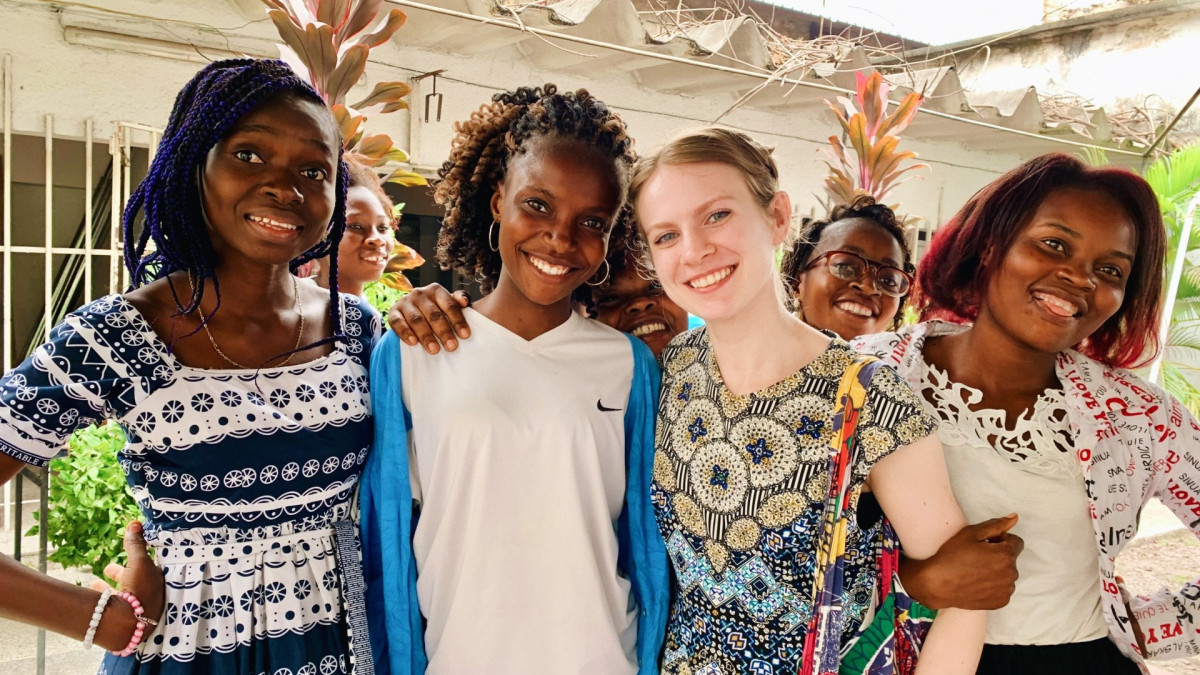 Evie Feuser was nervous. She was nineteen, just graduated high school and wondered what God had planned for her while she sat on an airplane charted for Kinshasa in the Democratic Republic of the Congo. Though she was accompanied by ReachGlobal missionaries Mark and Kathy Kato, she felt alone without anyone her own age. Several of the other students planning to attend the trip canceled, making her the sole student traveling internationally to a country she had never been to before.

“Not having people my own age just sounded really scary, because I wouldn’t have anyone to process things with who are also new to the experience,” Evie said.

Still, this wasn’t her first mission field experience. Several years ago, Evie traveled to Haiti on a youth missions trip and also to Zambia with her parents. For a while, she’s had an interest in missions—a fact that led the Katos to invite her to come to Kinshasa with Apex missions this summer. Though she had an interest, she wasn’t sure if missions was where God was calling her. The trip to Congo felt like a perfect opportunity to see God work. Despite being the only nineteen-year-old on the trip for three weeks, she felt called to go and took a step of faith in that direction.

Despite being the only nineteen-year-old on the trip for three weeks, she felt called to go and took a step of faith in that direction.

Kinshasa is the capital city of the Democratic Republic of the Congo and its largest city. It has roughly 15 million people and it's estimated to grow by 35 million by 2050. Of those 15 million, roughly 20,000 children live on the streets. Known simply as “street children,” the majority are boys that beg to survive, but a growing number of them are girls who make a living through prostitution. ReachGlobal has served in Congo for 100 years and continues to partner with local churches and ministries to share the gospel and help break the cycle of poverty.

Evie’s first week was difficult. She traveled to Kinshasa without knowing much about the region, what she would be doing and what Kinshasa would be like. The Katos told her Kinshasa is a big city with bad traffic congestion. Otherwise, she wasn’t sure what to expect. She soon discovered first-hand experience would be the only way to truly understand the environment and culture.

Culture shock came first. Because she had previous experience in Haiti and Zambia, she expected this experience would be similar. It wasn’t. Kinshasa, for one, was a big city and more crowded than she thought originally. She couldn’t believe how many people packed the streets. The busy, noisy streets alone overwhelmed her, but she also saw events that shocked her.

“I was looking out and saw a huge fight among a group of men. No one else seemed concerned at all, like it was kind of normal. But it was concerning to me.”

She learned firsthand about the traffic congestion early in the trip. She stayed with ReachGlobal missionary Emily Hochstetler while the Katos lived in a guesthouse two miles away. When they took a trip to pick up the Katos, the two-mile drive took about two hours. In other cases, trips were called off entirely because of the traffic.

In 2013, the Tabitha Center started with 12 girls and has since multiplied into many centers that equip thousands, providing both skills and jobs to lift women out of poverty.

In that first week, she struggled to know her role and how she might help. Admittedly, she felt a little useless; but things turned around when she arrived at the Tabitha Center in Kinshasa.

The Tabitha Center traces back to Claudine Selenga, a woman who saw the cycle of poverty and unemployment in Kinshasa pushing parents toward abortion and infanticide, while also forcing many young women into prostitution. At first, Claudine started Bible studies in her home which grew into teaching many women useful skills, like sewing, cosmetology and cooking. Eventually, the ministry became the Tabitha Center.

In 2013, the Tabitha Center started with 12 girls and has since multiplied into many centers that equip thousands, providing both skills and jobs to lift women out of poverty.

“Just that simple little thing, being able to do that, now gives them so much more confidence and helps them in their everyday lives,” Evie said.

The young women’s ages ranged from sixteen to twenty-four. Few were married and many lived on their own, with boyfriends or other families. Evie found the language barrier especially frustrating—she depended on a translator when speaking with them.

“It was really hard, especially when I would be talking to a girl at the center and she'd be telling the translator something, getting really passionate and excited about something, and then I'm just sitting there waiting to hear what she's saying.”

During her stay, Evie lived in a small house tucked away from the noise and bustle of Kinshasa. The house was comfortable with a courtyard full of plants and a pool. When Evie, Emily and other missionaries were finished with their day’s work, they would rest at the house. For her, it became an oasis away from the stresses of the city.

Yet the house also gave Evie an opportunity to spend time with Emily and watch her work. Emily works with a host of local missionaries to tackle the tasks for the day. According to Evie, when Emily’s workload was already full for the day, more would come her way. Her composure and leadership made an impression.

“Just living with her and seeing her day-to-day life was powerful to me. There's so much that she does that normal women her age and American women her age do not have to do and yet she's so selfless and humble. And she doesn't complain. It was really powerful to see how she was truly serving the people there.”

In her first week, Evie counted down the days and hours before she could leave but as she sat aboard the airplane on the Kinshasa airport tarmac, she felt sad and wished she could stay longer. When she came to Kinshasa, she stepped away from the safety and comforts of home to a foreign city where she, at times, felt uncomfortable. In that discomfort, she relied on God and His strength more than she ever had before.

Now she feels peace, knowing He will always be there for her. She went on the trip to see if God wanted her to go to the mission field and as she returned home, she felt confident that is exactly where he wants her to go.

To establish the church where the gospel isn’t known, ReachGlobal continues to invest in the next generation of missionaries and ministry leaders. Through Apex, Evie is a valuable part of that strategic pipeline.

This fall, she’s attending Moody Bible Institute to study Intercultural Studies. She’s talking with Apex about another trip next summer to Kinshasa. And she’s praying that God will continue to show her where He’s calling her on the global mission field.

This year, the EFCA is celebrating the Free Church of Congo’s 100th anniversary. Known as CECU, God has grown the ministry in Congo into over 1,000 churches with hundreds of thousands of believers. The EFCA is calling on local churches to join a deeper partnership with CECU through prayer, financial partnership, missions trips and more. You can learn more here.

To learn more about how you can take an Apex missions trip, visit apexmissions.org.