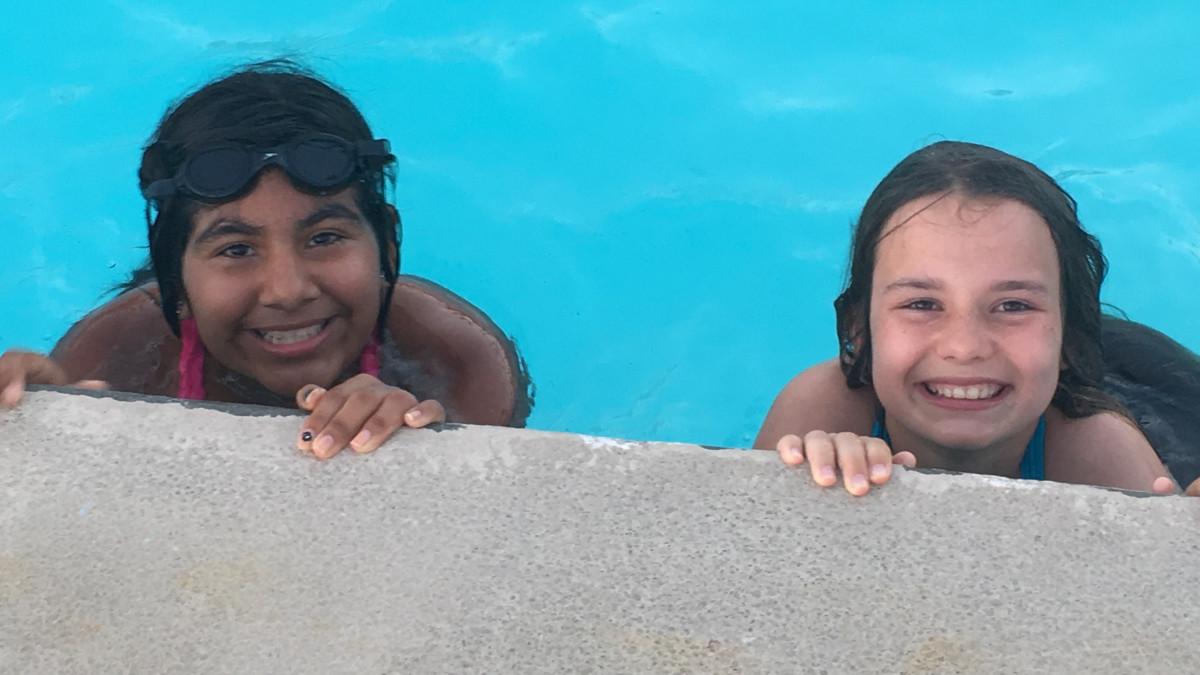 My almost-11-year-old daughter and her friend Diana1 jumped gleefully today into the public pool. They are old enough to care about having matching bathing suits but not quite teenager enough to care that their long hair is plastered around their face and cinched by awkward-looking goggles. They are too busy being mermaids and porpoises and out-diving each other.

Even though Diana and Tory are two different shades on the outside, those two are exactly the same in their love of water and games. Diana, dark skinned with lush black hair, consistently gets complimented on her gorgeous complexion and thick eyelashes; while Tory, freckled and fair, wins friends instantly with her winning smile. I cherish these days when they can enjoy childhood without the anxieties of adolescence.

Diana bonded with our family two Christmases ago when she and her older sister rather suddenly came to live with us. Their brother had fallen ill and required their mom full time at the hospital for a month. It was a delightful, if not chaotic, time. Elena worried that her daughters would be a burden to us and continued to try to “pay us back” with kind acts of service.

Elena is a hard-working single mom whom we have known in our Pico Union neighborhood for more than 11 years. She lived in some rundown apartments just north of our church when we first made contact through our sidewalk Vacation Bible School. Diana was in a stroller and her older sister an eager participant in our meager, but heart-felt program.

We were thrilled when we spotted Diana and her sister again about seven years ago, living on our block. Our visits together became more frequent and the girls joined our church’s after-school program called SAY Yes! Over the years we have enjoyed laughs and also serious conversations. Elena is an understated, resilient and determined figure in the lives of her children, and we love them all dearly.

How could I not get involved?

If someone’s mom or dad doesn’t come home, we need to be there.

About a week after the new president was sworn into office and stories about ICE raids came trickling through the pipelines, I got a call from Elena. Never one to make a request directly, she wanted to discuss what would happen if Diana came home from school one day and her mom wasn’t there.

Elena is undocumented and she is afraid. Her oldest daughter is now an undocumented young adult applying for DACA, and Elena has warned her to not go out as much on the streets, where raids take place.

But Diana? Diana is a citizen and would potentially be separated from Elena if the worst happened.2

“Do you want us to take Diana if anything happens to you?”

In that moment, everything I was hearing on the news and even the gossip around the neighborhood became intensely personal. Diana is already part of our family and the threat of her losing her mom is therefore a threat to our family. What immediate action could we take?

We met the next day, and with a yellow notepad and some online resources,3 we carefully worked through a checklist, which included: Did she have a copy of keys to her apartment? Extra cash to stash away? Were important documents easy to access, such as vaccination records?

Even though she hasn’t, to my knowledge, professed faith in Christ, we prayed together for mercy and protection. She was clearly touched. And she walked away with a semblance of a plan and the assurance that we were there for her.

In our 17 years serving in Pico Union, my husband, Scott, and I have been privileged to hear many stories of how and why people cross the border. It’s important for us to remain in a posture of learning and listening. So many have endured hardship that we will never come close to knowing, having grown up in loving families in this country.

What we do know is that the Lord identifies Himself as the God of the orphan, the widow and the immigrant, as well as the poor. We are constantly challenged in the depth and quality to which we represent Jesus’ heart where we live.

Being a neighbor and extended family to Elena means that we will look after Diana if her mother gets detained or deported. We are further challenging ourselves to consider how, as a church, we might collectively offer a voice in our community for the vulnerable among us.4

Because if someone’s mom or dad doesn’t come home, we need to be there.

Read the next post in this series, "My Muslim Friend and the Travel Ban," or return to the beginning of the series.

1
Her name has been changed.
2
Diana's younger brother has a father who is somewhat in the picture.
3
We used the “Family Preparedness Plan” from the Immigration Legal Resource Center. EFCA Immigrant Hope also offers multiple ideas and resources.
4
Two simple ideas include: Read and discuss a book that draws on different perspectives, such as Generous Justice, by Tim Keller. Then, if there’s already a local gathering of churches that is catalyzing to help immigrants, join them. Yes, it’s a complicated topic, but don’t allow the complications to keep you from participating at all.