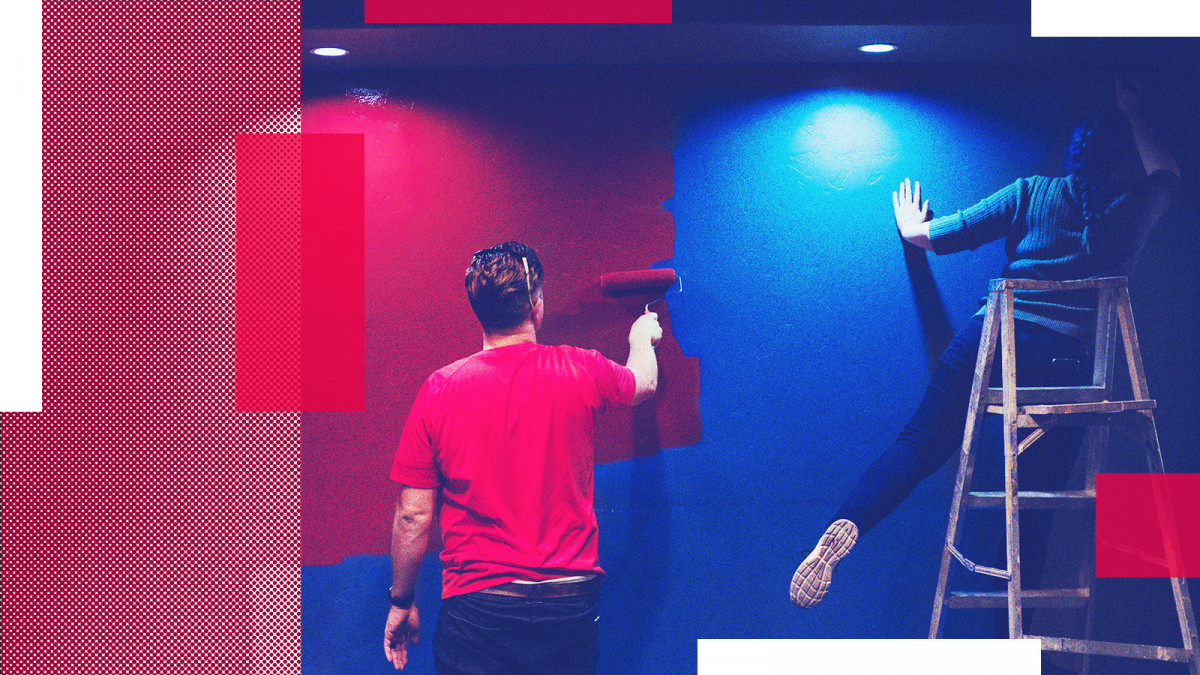 A recent headline at the satire site Babylon Bee reads: “Politics Now Nation’s Fastest Growing Religion.” Satire stings because it contains an element of truth. For many Americans, almost everything in life is filtered through a political lens.

As Christians, and especially as church leaders, we must begin to recognize how politics, on both the right and the left, challenges the centrality of Christ in all of life. In addition, we must also consider how a life that strives to follow Christ will transform our political and public involvement.

The EFCA is pietistic. We understand that a reborn faith will also result in devotion to Christ in all the details of life. If you get up in the morning to read God’s Word and pray, if you meet in homes with God’s people, if you serve the poor and the marginalized, and if you gather for corporate worship with the church, then these practices both reveal something about your faith and also shape it.

Politics is religious. If you get up in the morning and check media feeds filled with partisan voices, if you mainly read books or listen to talk radio that affirms your political leanings, and if you mainly discuss politics with those who agree with you, then these practices, too, reveal something about your heart and also shape it. In these regular practices, Fox News or MSNBC become the source of daily devotionals, the platform of the Republican or Democratic party is a confessional statement, and the practice of evangelism entails calling others to turn from their ways in order to “Make America Great Again” or to “Feel the Bern.”

We are highly aware of other political camps and make sure that we stay with our own people.

What do our lives look like when politics becomes our religion? Here are three characteristics of a life centered on politics.

1. A partisan or tribal life

In this life, we become completely devoted to one side of the political aisle; we don’t merely lean one direction. We’re all in. In addition, this political life also has a strong sense of “us” versus “them,” the good guys against the bad guys. We are highly aware of other political camps and make sure that we stay with our own people.

Andrew Sullivan, a writer and political commentator, believes this extreme tribalism, driven by a religious impulse, is expressed in “various political cults.” In his piece “America’s New Religions,” Sullivan writes:

This life not only follows clear tribal lines but also has a combative posture toward the other side. The other side is characterized as the enemy, as people to be opposed and confronted because they are what’s wrong with the world.

Our media diets lead to the regular consumption of this model of combativeness. According to a recent report called “Hidden Tribes”:

"Media executives have realized that they can drive clicks, likes, and views, and make money for themselves and their shareholders, by providing people with the most strident opinions. This means that the most extreme voices―no matter how outlandish―often get the most airtime. In addition, people with the most extreme views are often the most certain of their positions. They are willing to argue with anyone and avoid moderating their opinions or conceding points to the other side. All this can make entertaining television and viral social media content."

Such a combative posture can begin to affect our relationships. Do others often get frustrated talking about politics with us? Do they avoid talking with us about the topic altogether?

The angry life may begin with a sense of frustration, especially toward those on the other political side, but this feeling of frustration will eventually morph into fear and anger. A report from Pew Research found that 87 percent of Democrats and Republicans “have at least one of these negative feelings about the other party—frustration, fear or anger.”

Politics is not neutral. It often becomes a counter-narrative to the gospel by pushing Christ out of the center of our lives.

Politically motivated anger can become dangerous. In June 2017, a shooter opened fire on Republican politicians playing baseball at a charitable event. And in October 2018, a man shipped pipe bombs to various Democratic politicians.

The Christian faith is political

A recent report found that people who are actively involved in church tend to have less extreme and less partisan views politically. In other words, when Christians make their faith the center of their lives, and there is evidence in their daily and weekly practices, then it has an impact in their politics and public engagement.

We don’t pledge ultimate allegiance to any political group or person, but rather, our ultimate loyalty is to King Jesus.

What will our lives look like when the Christian faith drives our public and political engagement?

Christians unite around the confession that Jesus is “King of kings and Lord of lords” (Rev 19:16; cf. 1 Tim 6:15). He is the promised Messiah who has the government “on his shoulders” and is called “Wonderful Counselor, Mighty God, Everlasting Father, Prince of Peace” (Isa 9:6). Affirming these qualities about Jesus has become so routine that we may forget the political nature of these names. The claim “Jesus is Lord” is “also a political act in its refusal to say ‘Caesar is Lord!’” (Smith, Awaiting the King). Christians believe that a political party is not ultimately in charge, nor is any president, prime minister or royal family. We don’t pledge ultimate allegiance to any political group or person, but rather, our ultimate loyalty is to King Jesus.

Our allegiance to Christ will impact our relationship with politics. Some Christians may lean to the right or to the left. They may primarily vote for Republicans or Democrats. Yet they will never be completely in the back pocket of any political group on every issue. Christians are called to speak the truth (Zech 8:16-17). When our allegiance is to King Jesus, then we will often find ourselves challenging aspects of a political platform. When is the last time we challenged aspects of our political ideology because of our allegiance to Jesus?

Christians affirm that every person is created in the image of God (Gen 1:27). We also seek to obey the great commandment to “love our neighbor” (Matt 22:37-40). So revolutionary is the call to love in the Christian faith that we even apply this command to our enemies (Matt 5:44).

This life of love creates a radical community within the church. In Christ, there “is neither Jew nor Gentile, neither slave nor free, nor is there male and female” (Gal 3:28), nor is there Democrat and Republican, neither progressive nor conservative. After the 2016 presidential election, Christians who voted for Trump and Christians who voted for Clinton (or for neither) gathered together in corporate worship. The love of Christ continues to unite the church.

In contrast to the religion of politics, shaping us into a people of unrighteous anger, the Christian faith shapes a people of joy.

In addition, this life of love seeks the good of all people, including those who don’t have faith in Jesus. For Christians, the public square is not full of enemies to be defeated but with people who deserve love. Miroslav Volf says the belief “that God is love and that we are created for love” results in human flourishing (A Public Faith). Volf writes:

The apostle Peter writes, “Though you have not seen [Jesus], you love him; and even though you do not see him now, you believe in him and are filled with an inexpressible and glorious joy” (1 Pet 1:9). In contrast to the religion of politics, shaping us into a people of unrighteous anger, the Christian faith shapes a people of joy.

Christians have an opportunity to show a different approach in our civic involvement if we take our joy in Christ into our public lives. As Greg Foster writes in Joy for the World, this joy is not an emotion, but the joy of God as “the state of flourishing in mind, heart, and life that Christians experience by the Holy Spirit.” This joy is not naive to the real darknesses and injustices in our world, but instead knows that neither these things nor destructive politics will get the final word.

In the book, One Blood: Parting Words to the Church on Race and Love, John Perkins writes about the example of African-American Christians in the face of great violence, fear and anger.

“They suffered well. Their suffering was undergirded with the joy of the Lord. They rested in the assurance that He would deliver them—if not in this life, certainly in the next.”

In his book The Political Disciple, Vincent E. Bacote writes, “Our beliefs are not only for personal gain but also for public expression.”

The EFCA Statement of Faith gives a framework for our churches to display this kind of public expression. Our Statement of Faith affirms, “God has graciously purposed from eternity to redeem a people for Himself and to make all things new for His own glory” (Article 1). God will both redeem individuals and “all things.”

In addition to our Statement of Faith, the EFCA is united around the mission to glorify God by multiplying transformational churches among all people. Through the power of the Holy Spirit, local churches, in proclaiming and living the gospel of Jesus Christ, can be agents and instruments used of God to transform people, neighborhoods and entire cities. For this transformation to happen, Christians need to be active to various degrees both civically and politically. Yet exactly what this public and political engagement looks like will be different from church to church. The EFCA has a wonderful culture of uniting around the essentials and allowing diversity in the non-essentials.

My challenge to EFCA churches, who may have different approaches to public and political theology, is to not be indifferent to these matters. Call out idols on the right and the left, develop a framework for civic engagement, and publically pray for God’s justice and transformation in your community. EFCA churches obey Christ’s commission “to make disciples among all people,” which includes “bearing witness to the gospel in word and deed” (Statement of Faith, Article 8). Let’s “live out our faith” by confronting the religion of politics and by giving “back to Caesar what is Caesar’s, and to God what is God’s” (Matt 22:21). My prayer is that our churches will help transform people, neighborhoods and cities, and this happens when God works through us in a diversity of ways, including in our public and political lives.