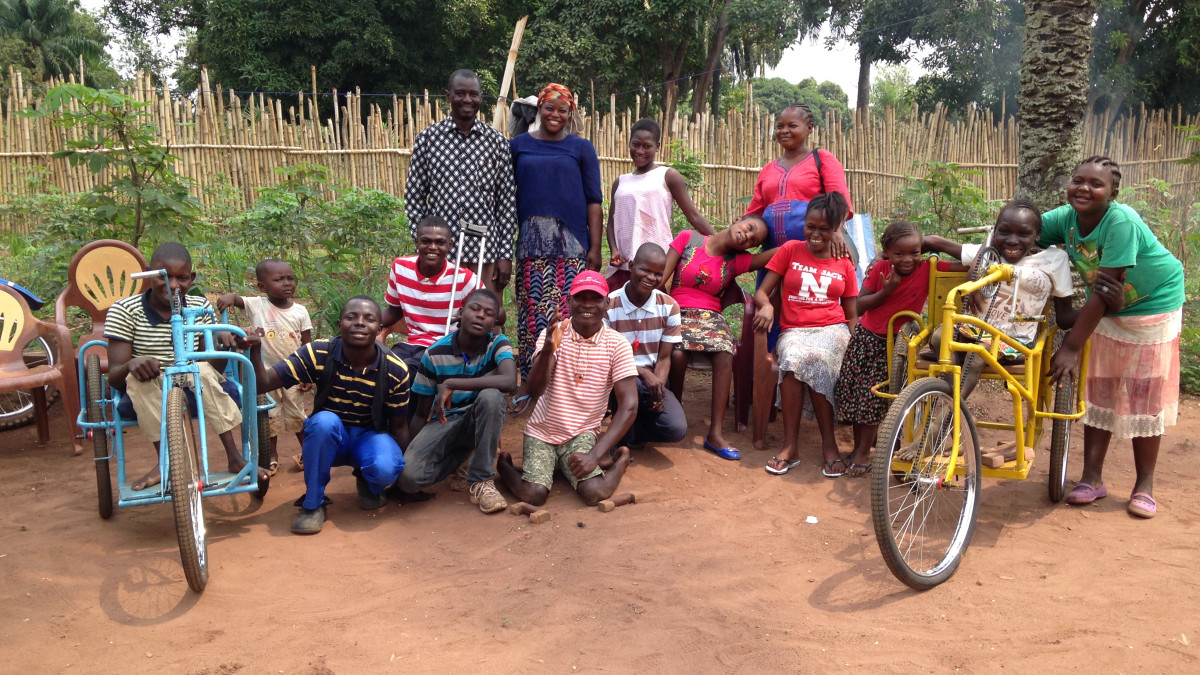 One morning three years ago, a boy dragged himself up my house porch stairs, located near Tandala Hospital1, and introduced himself to me. He said his name was “Pitalo,” which means “hospital” in Lingala. His speech was challenging, and he was partially paralyzed. After visiting with him, I asked if he’d like to go to a special school in Gemena.

He said he was too stupid to learn anything. Pitalo had been told this all his life, and he was not wanted nor loved by anyone.

Pitalo had no idea of his age, but we estimated him to be 17-18 years old. He has no birth certificate, and I learned he had many childhood illnesses that left him paralyzed with contractures and speech difficulties. Not only did his body have immense physical limitations, but he also he had poor nutrition, no schooling, no health care, no loving relationships and no nurturing. He had no adults in his life, no dignity.

His mom deserted him as a young, frail boy.

His father remarried, not one, but three wives, and none of them wanted to care for Pitalo. He was ignored and neglected. They even tried to poison his food, but he fled to another distant relative’s house. There, he was also rejected and considered a nuisance. That is when I met him.

From devalued and rejected to loved and cherished

Kids with disabilities like Pitalo are devalued and often unloved. They don’t get a chance to go to school. Often, they are left at home, never getting out. Even though they have a GlobalFingerprints sponsor, their circumstances still provide significant challenges. Everyone calls them “zoba,” or “babebi,” meaning stupid or ruined and useless. Those around them find no value in these children

Thus, when I asked Pitalo if he’d like to go to our special school, he responded, “Mama, I’m zoba. I can’t learn.” But oh, they were wrong!

In the Democratic Republic of Congo, GlobalFingerprints currently sponsors 1,670 children. The majority of them live in remote villages with relatives or neighbors (200 of them live in a bigger city and the rest live in very remote Congo).

Children who were ridiculed and feared now receive nurturing care, education and the love of Jesus Christ.

Promise Home, GlobalFingerprints’ transitional group home for kids with special needs in Gemena, opened in August 2018. We provide a safe, loving home for children who are seen as useless to their families and society at large. Children who were ridiculed and feared now receive nurturing care, education and the love of Jesus Christ. They are allowed to develop and are accepted and loved unconditionally.

Our mission at Promise Home is to reach the most vulnerable child. And that was Pitalo. Through GlobalFingerprints, we make special wheelchairs for many kids who can’t walk. So I promised Pitalo a wheelchair and he got one even before he received a sponsor. Once he had a sponsor from GlobalFingerprints, we promised he would be one of the first students/residents at the Promise Home. He could hardly wait!

He now lives at Promise Home; he loves his life there and has blossomed.

A boy full of promise

At Promise Home, Pitalo has been nurtured and discipled by Papa Lisasi, the Promise Home Dad. He wants to forget his old life and the name “Pitalo,” so he chose the name “Adolphe.” Why? He says it’s because he doesn’t know anyone with that name so it would be special, just for him.

Best of all, Adolphe loves his Creator Lord. Papa Lisasi is amazed that every evening at 6 pm, Adolphe pulls himself aside for a time of adoration, confession and intercession. I was humbled to learn that I am among those he remembers every evening. He has claimed Jesus as his Lord and Savior and wants to be baptized this December.

Adolphe is learning to make tables and chairs and is proud of his work. He loves working in the garden, weeding and planting corn. His life now has purpose. Adolphe knows that he is created and loved by his Heavenly Father and God’s people, and that has made all the difference in his life.

The special three-wheel trike/wheelchair that GlobalFingerprints built for Adolphe means he does not have to crawl and drag himself on the ground; it gives him dignity and respect.

"You are created by God and loved so much, be confident in who God made you."

But recently, I noticed that Adolphe looked funny on his trike, he was too big for it. His House Dad said that they don’t know what to do, Adolphe is growing so fast and had outgrown his trike! When I jokingly told him that he would have to stop eating, he laughed and laughed! We had a new one made for him and gave his old one away to a smaller person.

Peggy, a visiting physical therapist from the U.S. asked him, “When you graduate from Promise Home, how do you hope it has helped you?”

Though difficult to understand, Adolphe answered clearly without hesitation, “I want others to see that I’m a person, too!”

“Adolphe, you are created by God and loved so much,” Peggy responded. “Be confident in who God made you and look people in the eye when you talk. Don’t be afraid!”

Adolphe’s head came up immediately, and with a huge smile, he looked her square in the eyes.

Our prayer for all of our 17 Promise Home kids is for them to “know the love of Christ that surpasses knowledge” (Eph 3:19). As Paul writes in Ephesians 3:16-17, we want Adolphe and the others to be strengthened with power through His Spirit in their inner being, so that Christ may dwell in their hearts through faith...that they would be rooted and grounded in love.

Adolphe has come a long way from crawling up on the porch to introduce himself as “Pitalo,” and all due to God’s transforming Word and love.

Adolphe now locks eyes with me, smiles big and asks how I am doing. Through GlobalFingerprints, Adolphe is no longer “Pitalo,” always sick and weak, he is growing strong in His Lord. If you ask him what he wants to do with the rest of his life, he’ll answer, “Worship and serve my God!” And that’s exactly why he was created.

Today at the Promise Home, I was trying to fix a walker of another boy who has cerebral palsy, but I couldn’t budge the walker’s legs. Adolphe wheeled up to me with confidence and said, “Give it to me. I’ll fix it.” The adults sitting there were amazed, he fixed it! He is loving being useful and helpful.

Adolphe has come a long way from crawling up on the porch to introduce himself as “Pitalo,” and all due to God’s transforming Word and love shown through His people.

Tandala Hospital, built in 1955 by EFCA missionaries, is now run by the Evangelical Free Church of Congo. It’s one of the largest hospitals serving the northwest region of Democratic Republic of Congo, offering specialized care in ophthalmology, dentistry and radiology. Tandala is heavily dependent on donations from Evangelical Free Churches, as well as from individuals and a few other organizations. Stay in touch via Tandala's Facebook page.

Orphan Sunday, November 10, 2019, is the perfect opportunity to learn more about GlobalFingerprints and how you can sponsor a child in need. You can join all the other EFCA churches throughout the country to learn more and pray for children in need throughout our nation and the world. For more information about the Promise Home in Congo, contact us at: globalfingerprints@efca.org or Rachel.Balia@efca.org