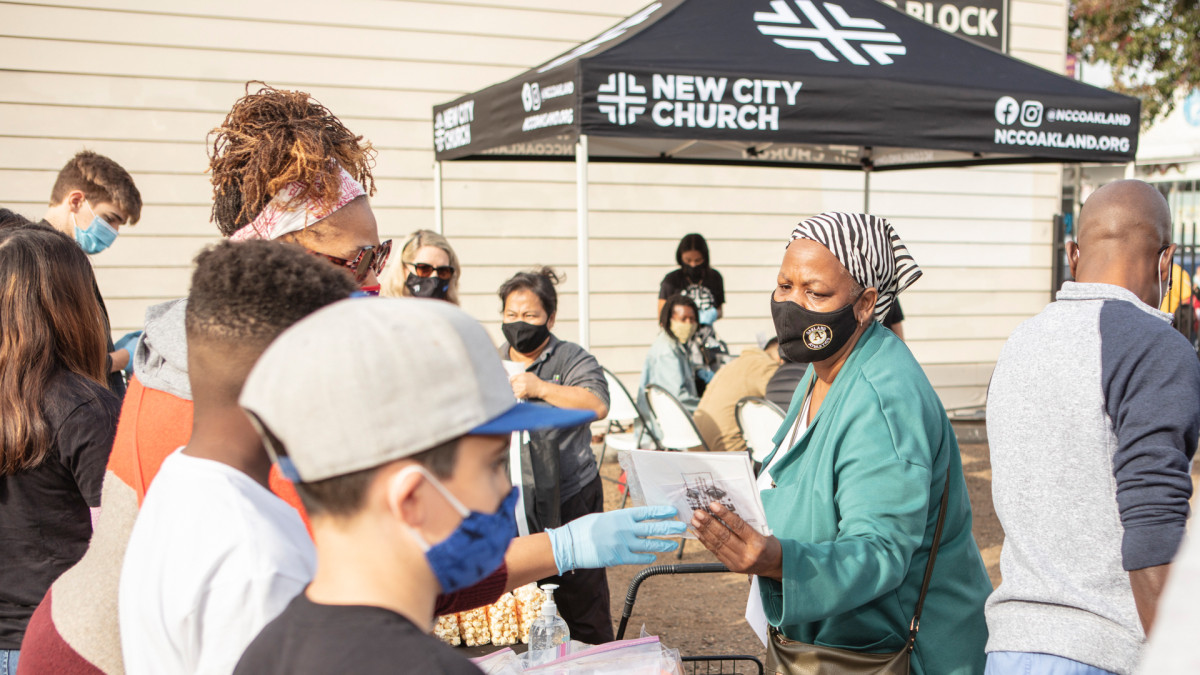 In college, I was a leader in a campus ministry at the University of California—Berkeley and spent nearly all my free time doing churchy things, like planning gospel-centered events and spending intentional time with sisters in Christ. I loved being part of a group that shared common experiences and world views, supporting each other in the challenges of college life.

I attended a local church on Sundays and served in the kid’s ministry, but never referred to it as my “home” church. It was a multi-generational church in El Cerrito, California that was close to my school. I liked the sermons, worship and respected the elders but never really got to know any of the adults in the congregation.

I was a perpetual visitor: I went if I had a ride and left as soon as my duties were done. I knew I had to go to church, but I didn't feel the need to have community at church. I still only hung out with my friends from my college fellowship.

A shift in my perspective

The fall of my junior year, I moved to England for a semester to study abroad. I attended the University of Sussex and lived in the city of Brighton, about an hour and a half away from London. I quickly joined a college fellowship called the Christian Union.

When we left on Sundays, we launched out of the team huddle feeling commissioned to our work places, homes and schools.

This fellowship wasn't like my experience with a Christian college fellowship back home. At UC-Berkeley, I was used to a ministry with a strong sense of community, welcoming people into the fold. The Christian Union at Sussex was very mission driven—students primarily spent their time on campus trying to meet people, bless them and share about Jesus.

The Christian Union regularly held events called Text4Toasties, when we would deliver food to anybody who texted us a question about Christianity or the Bible. We would walk all over campus, bringing sandwiches and answering students' biggest questions about Jesus. We also held events from 9 p.m. to 3 a.m., welcoming students who were coming back from late night parties. We'd offer food and tea, and these late nights would end in gospel conversations. The members of the Christian Union came to events to serve, not to be served. I was astounded by the commitment and sacrifice demonstrated in what I had expected to be a social club.

Encouraged by my peers, I became part of a local church where people came to Sunday gatherings with a different expectation than I had exercised previously.

For the first time, I saw that the Church was not just a location for like-minded people to congregate comfortably. God showed me what it looked like to seek Him with His people. It was like the best team huddle ever—we brought different experiences, understandings and passions, but were unified through our love for a huge God.

When we left on Sundays, we launched out of the team huddle feeling commissioned to our work places, homes and schools.

After service, people would stick around and talk for a long time or go somewhere to continue conversations about the sermon or real difficulties in their lives. I was invited over to people's homes, which meant a lot in a new country.

I had a new understanding of how God could use the Church to grow believers and His kingdom.

I experienced some anxiety for the first time in England. There were times when I felt terrible, and none of my friends and family members back home were awake due to the time difference. It meant volumes to know I had friends close by praying for me and encouraging me with Scripture and kind words.

In this community, I was challenged, sanctified, loved and cared for in ways that so clearly pointed me to Christ.

As I became closer with members of the church who were not students, I learned more about what it looks like to follow Christ outside the college environment. Working people and parents would come home and cook so that they could host college students. Professionals shared about how their faith led them to change their career trajectories.

It felt weird at first to become friends with people who had kids, but the range of perspectives and opinions prompted me to ask big questions of God; then the church encouraged me to study Scripture on my own and with the guidance of church leadership. God blessed me through this fellowship of believers and it opened my eyes to the gift He so lovingly designed and created, the local church.

“Rather, speaking the truth in love, we are to grow up in every way into him who is the head, into Christ, from whom the whole body, joined and held together by every joint with which it is equipped, when each part is working properly, makes the body grow so that it builds itself up in love.” Ephesians 4:15-16

This little church in England proved to me that God’s design for the Church is so much greater than I had ever given it credit for.

Upon my return to the Bay Area, I embraced my church differently: nothing was especially distinct about the service or congregation of my church in England—the difference was my engagement. Why should church look any different at home? I thought. I decided to engage more deeply.

My first small step was to join a small group that wasn’t solely composed of college students. I met weekly with other followers of Jesus in different stages of life and allowed church to become more than a weekly check-list item. Once I decided I wanted to make this church my home, it was easy. I already loved this family that was just waiting for me to step into deeper commitment.

One day, a foreign and unprompted thought came into my head: church planting. I wanted to help plant a church. I paid attention to this because it seemed unnatural—I had zero experience with church plants and my type-A personality craved the stability of a well-established church. I prayed about this desire daily. I studied Acts and was challenged and encouraged by the boldness of the early church. I had a new understanding of how God could use the Church to grow believers and His kingdom.

More specifically, I read books that highlighted how God can use the Church outside the walls of the church building. I was most impacted by the idea that God loves cities, like Berkeley, San Francisco and Oakland. I had grown to love these areas and realized that this heart for the city reflected God’s heart. I was excited about the idea of God using a new church to bring renewal, love and generosity to the Bay Area. I had no idea what God had planned in my future, but I had a feeling His plans for me were in the Bay.

I approached my friends, family and pastors for prayer and spent time with God asking for peace and clarity to help make this decision.

Not long after, the Garcia family visited Solano Community Church to announce that they would be starting a church plant in Oakland in a couple years. I launched out of my seat to greet them after service, feeling affirmed and grateful that God opened this opportunity to me. After only a few months, I had grown to love the people and the culture of East Bay and was determined to see the local church thrive there.

A year later, I was in my senior year at UC-Berkeley—what they call “recruiting season” for us industrial engineering majors. I applied for roles at over 90 companies—consulting firms, supply chain positions and big corporate leadership programs. I got more than a handful of job offers, but none of them were in the Bay Area.

The best opportunity was in Atlanta, Georgia: it promised career growth, adventure and the quality of life I was hoping for. It was an offer to join a rotational leadership development program: I'd cycle through three different departments and roles, which was attractive because I was not sure if I wanted to commit to any specific role. It was a prestigious program within the company, so it promised stability after completion of the program. It was an enticing offer and I only had so long before it would expire.

But if I moved to Atlanta, I would not be able to join the Garcias in their church planting endeavor in Oakland. I would have to start from scratch in my desire to be part of a church plant.

At this point of the process, I felt burnt out. I had traveled all over the country to attend interviews and was falling behind on my classwork. I was desperate to take a job. I approached my friends, family and pastors for prayer and spent time with God asking for peace and clarity to help make this decision.

God showed me how much of a gift the local church could be—not just to me, personally, but for the broader community where it’s planted.

Mere hours before that second extension expired, I received an offer at the firm in the Bay Area. As an engineering consultant, I would get the same breadth of experience that I had been hoping to get from the rotational program, but I didn't have to move every year. It was a miracle from a kind and gracious God, and yet another affirmation of my desire to be part of the church plant. After I accepted the offer, I quickly informed the Garcias that I wanted to be part of their core team for planting New City Church in Oakland.

I am young, inexperienced and had no qualifications to plant a church, but God is using me and using New City Church to make Jesus known in the city of Oakland.

Part of the heartbeat of New City is to generously serve and bless the city of Oakland by meeting simple and practical needs. Within a few months of opening, we had a Thanksgiving event where we gave out baskets of food to families and brought an ice cream truck for the kids. When we ran out of baskets, the Garcias took the names and contact information of everyone still waiting in line and delivered baskets to each of them.

We've also partnered with local schools to support teachers, beautify campuses and get to know the community. We threw a WinterFest, where we served a giant pancake breakfast and hosted a toy store where parents could stock up on heavily discounted Christmas gifts. We also offered free family portraits for holiday cards.

For a long time, I greatly underestimated God’s design for the Church. I demoted church to being a supplemental element of ministry. It wasn’t something I needed because I was involved in campus ministry. But God showed me how much of a gift the local church could be—not just to me, personally, but for the broader community where it’s planted. I am grateful to be part of a diverse community of believers, iron sharpening iron, and living generously to love and serve one another and one of the most unchurched areas in the country.

This Sunday, the EFCA is celebrating Church Multiplication Sunday by encouraging churches to pray for church planting efforts and consider how they might get involved, like Shannon. You can learn more about how you can join us this weekend and on our mission to see God glorified by multiplying transformational churches among all people here: efca.org/church-multiplication-sunday.