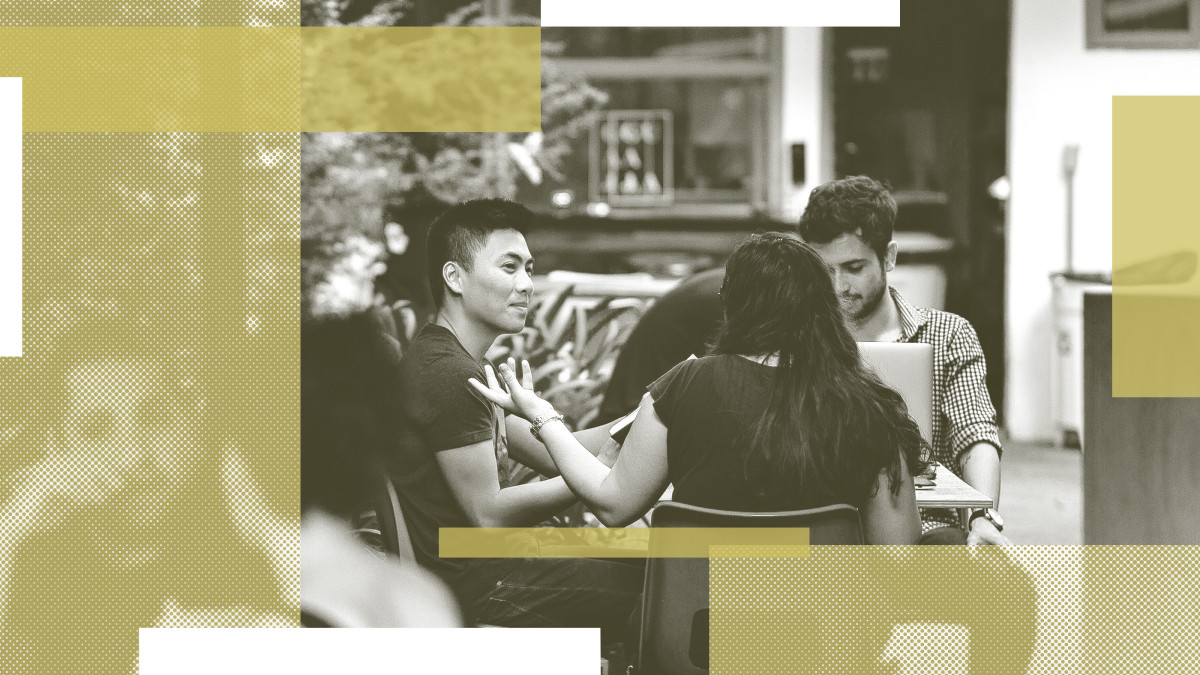 When I was in second grade, a family move involved a change of schools which in turn led to an interview with my new teacher. She asked some easy questions: Where did you move from? Do you have any brothers or sisters? What is your dad’s job? And then this stumper: What religion are you?

I was silent for a moment and then answered, hesitating: “Democrat?”

To say that I cut my teeth on all things political is an understatement. There was virtually no mention of God in our home, but plenty of discussion at many a dinner table about current candidates, justice and social issues—with some lively cheering for the New York Yankees thrown in for good measure.

“Make no mistake about this: the kingdom of God will not come in aboard Air Force One.”

Action seemed to follow naturally from the convictions I’d been raised on. I helped register voters in the lowest socio-economic, most racially diverse neighborhoods in our city long before I was old enough to vote myself. I became a junior member of the NAACP at the age of 13. In 1965, I invited migrant workers in California’s central valley to march with Cesar Chavez from Delano to Sacramento. I even organized a black-armband rally against the Vietnam War at my high school (while also holding a drive for paperbacks to send to service men and women overseas—we sent 2,500 books).

All of this political activism unsurprisingly led me to pick UC Berkeley as the place I would attend college and become a radical left-wing journalist. I graduated four years later with yes, a degree in journalism—but as a revolutionary for Jesus instead. God has such a sense of humor!

An interesting thing happened for me along with my babyhood in Christ, being well-discipled by staff of Campus Crusade for Christ (now CRU) on the Cal campus: I became increasingly aware that the only lasting, positive change in a person’s life, and by extension, our culture, would be brought about by Jesus Christ.

Somehow all our marches, protests, activism and smug superiority (that we were the only generation who “got” it) showed itself to be one more deceptive façade.

Is it characterized by excellence and worth praising? Dwell on it.

I remember attending a conference in Washington, D.C. where one of the speakers was Cal Thomas, evangelical Christian and columnist for USA Today. His opening line? “Make no mistake about this: the kingdom of God will not come in aboard Air Force One.”

Good point. But one that pushes the buttons of those who believe that because of the principles on which our country was founded, then we are owed a godly government. We will have that someday—and the Head will be Jesus Christ—a true theocracy!

But in the meantime, how do we handle issues that are political and therefore volatile? Ballot measures which often feel like neither option (yes/no) would be biblical?  City, state and federal issues which have so many variables and—like pieces of a puzzle without the finished picture to consult—are totally unworkable and confounding? How do we find unity in our churches, fellowships and home groups when our pushpins are all over the map of political positions?

Anyone else discouraged by what Election Day, and the lead up to it, has become? Anyone else despairing? Anyone else overwhelmed by the political vitriol, the culture wars, media bias, passive voters, aggressive lobbyists, international interference and more?

It’s enough to make a cynic of even the most ardent Pollyanna.

The Apostle Paul anticipated that there would be times we would need to hit the pause button, times to refocus and fix our eyes on Jesus, the author and perfecter of faith (Heb 12:1-2). An election is surely one of them! And Paul suggests a powerful checklist for that re-alignment and view of the world:

Is it true? Is it honorable, is it right? If so, think about it. Is it pure or lovely or of good repute? Give it your close attention. Mull it over or meditate on it. Observe and enjoy it. Is it characterized by excellence and worth praising? Dwell on it.

Conversely, if it’s false, dishonorable, wrong, impure, ugly, perverted, shoddy, debasing or debased, shun and avoid it. Don’t give your mind or energy to it. Don’t engage or linger. I need that reminder with every candidate flyer choking my mailbox, interminable TV ads, shouting matches masquerading as debates and even awkward, snippy and snarky words exchanged between friends.

It’s about starting a conversation, not the termination of one.

First, last and in between, fix your eyes on Jesus.

And in the meantime, as those trusting the Holy Spirit to grow us in Christ-likeness, we need to do all we can to keep doors of communication open, to avoid drawing lines or creating camps of thought based on groupthink, and be willing to listen, listen, listen.

I love the example our lead pastor, Darin McWatters, at Fullerton Free Church has set in similar challenging situations. I’ve seen firsthand (and had reported to me many more times) when he will say to someone who has given him an earful: “I don’t agree with you on that point [mask/don’t mask, open church doors/don’t, the role of women, having a cross in the worship center, endorsing candidates or ballot measures from the pulpit, etc.] but I really want to hear why you’ve arrived at that conclusion and where you see that in Scripture. How about we meet for coffee or grab breakfast or lunch together?”

Talk about a respectful, loving, truthful way to “win” a person without needing to win an argument. It’s about starting a conversation, not the termination of one.

I love that “flag” even more than the American flag.

So, of course, we come to these crucial conversations with our backgrounds, our biblical understanding, our wisdom, our completed ballot, even—but we leave room to find common ground rather than walls or ideologies or political parties which separate us, and we allow the Holy Spirit all the room He needs to work.

At about 10 a.m. on the morning of September 11, 2001, I carried our flag outside and, with tear-filled eyes, placed it in the bracket by our front door. A flag has flown there, rain or shine, day or night, for the past 21 years. We’ve been sure to observe flag etiquette: it has a light on it each night. When it’s become faded, we’ve purchased a new one and carefully folded the old, passing it to a veteran who is part of the ceremonial flag-burning each year at his VFW.

I love our flag. I love so much of what it represents. To me, it is freedom fighters and baseball games, military veterans and newly-naturalized citizens, a beacon of hope and a confirmation of strength. When they raise the flag and play the National Anthem, I stand with my hand over my heart. Believe it or not, I even stand in my family room when they play the National Anthem and raise the flag for the American gold medal winners during the Olympics. My kids may roll their eyes, but I don’t care.

I am a first-generation American, and at an almost-adult age I came to know the One who could make sense of wars and religious conflict and political battles and the results of sin. I came to realize that the banner which He flies over me is love. I love that “flag” even more than the American flag.

Prayer: Lord Jesus, You are everything Philippians 4:8 describes: true, honorable, right, pure, lovely, of good repute, excellent and worthy of ALL praise. Today, tomorrow, I’m purposing to take my eyes off circumstances, elections, dissensions and discussions and instead to think about You. To worship You. To rejoice in You. To have a heart of thanksgiving for You. Amen.