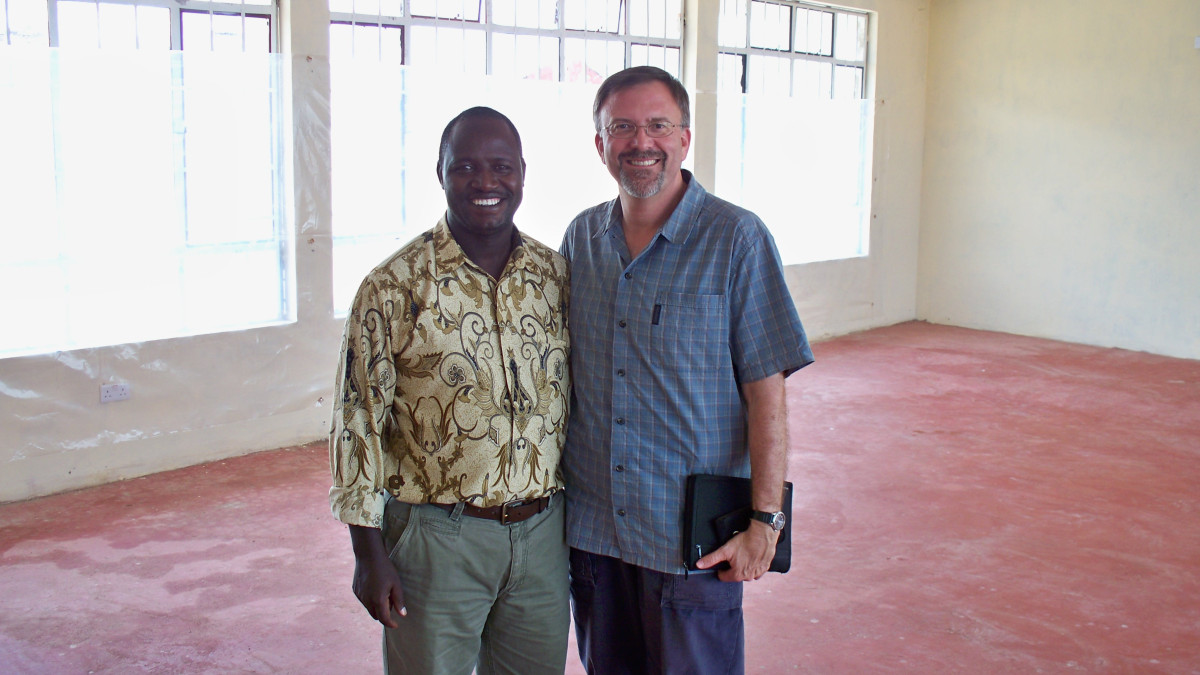 Every month, EFCA President Kevin Kompelien highlights stories, vision and leadership from around the EFCA in his monthly e-newsletter, "Partners with the President." This month, Kevin sat down with Eddie Cole, EFCA executive vice president of national ministries, and Brian Duggan, EFCA executive vice president of international ministries (featured in the video below), to discuss "one EFCA" and how that idea of biblical partnership supports our mission to glorify God by multiplying transformational churches among all people.

One of the most vibrant church planting movements I’ve ever witnessed is in East Africa. It’s a movement based out of Nairobi, Kenya, focused on unreached people groups and seeing Muslim people come to Christ. God has blessed that ministry immensely. They’re tracking church plants and disciplemakers to the third and fourth generation.

That movement is led by my friend, Aila Tasse (pictured with me above). When I served as the international leader for ReachGlobal Africa, I’d visit Aila whenever I traveled through Nairobi. Every time we’d meet together, I’d feel so encouraged, refreshed and renewed by how God was working through him and his ministry.

During one visit, after spending the day together, Aila was driving me back to the place where I was staying. As I sat in his passenger seat, I turned to him and said, “Aila, I feel really bad. I spend so much time with you. I’ve learned so much; I’ve been so encouraged, and you’ve helped me in so many ways. But what have I really brought to you?"

What we do comes out of the essence of relationship that we have. This is koinonia.

With the kindest look in his eye, Aila turned to me and said, “But Kevin, you’re my friend. Every time we’re together, you pray for me and my family. You help me think through my ministry. You’ve introduced me to people that have helped expand my ministry. If I lived in the U.S., I’d be a Free Church guy.”

In that moment, Aila gave me something I’d use for the rest of my ministry on this earth—he gave me a tangible sense of what partnership means.

As we turn the page into 2020, I want to turn our focus to this idea of partnership, because it is integral to everything we do as a movement.

When I think of biblical partnership, I think of the Greek word, koinonia. Translated into English, it essentially means “fellowship,” but in context, we see a fuller, clearer picture of its meaning. Paul used it when writing to the church in Philippi:

"I thank my God every time I remember you. In all my prayers for all of you, I always pray with joy because of your partnership in the gospel from the first day until now, being confident of this, that he who began a good work in you will carry it on to completion until the day of Christ Jesus." (Philippians 1:3-6)

It’s helpful to see this passage in the broader context of Philippians. This book is a missionary prayer letter, of sorts, sent by Paul to a local church he helped start (Acts 16). Essentially, Paul is saying, “I’ve been doing this work, but because of our partnership, we’re in this together.” It’s a tangible reflection of biblical partnership: Out of relationship and shared values, we each contribute, and we do things together.

Partnership is fellowship or close association that emphasizes what is shared in common. And out of those shared values, we participate in things together. What we do comes out of the essence of relationship that we have. This is koinonia.

In 2015, about a month after I was elected as EFCA president—since I’d never really been in such a position before—I spent a week away. I knew there were a million things I could have focused on in this role, so the question became: What do I do?

If we, as the EFCA, want to glorify God by multiplying transformational churches among all people, we need each other.

After thinking and praying about God’s direction for me, two things settled on my heart:

God never speaks audibly to me, but there was this very clear sense in my heart that the Lord was saying, "You just came from a gathering of local church leaders and pastors, missionaries, district superintendents, national office staff, and people from Trinity called EFCA One. I'd really love it if this could become one EFCA." We all were gathered together at EFCA One, but we still operated like we were in our own little silos.

I told that story first at our Missional Summit in 2015 and then at district conferences, EFCA One and other events around the country. Next thing I know, this idea of “one EFCA” took on a life of its own—so much so that our communications team helped me land on a clear definition: local, regional, national and international ministries working together toward common ministry objectives with shared values and trusting relationships.

If we, as the EFCA, want to glorify God by multiplying transformational churches among all people, we need each other. If we want to extend gospel ministries and multiply disciplemakers, we need partnership. If we want to strengthen, revitalize and plant churches, we need shared values and trusting relationships.

Working together in genuine partnership has been key to my ministry for more than three decades. This helped me in developing the Foundation Stones, the Missional Diagram and essentially everything I’ve talked about in “Partners with the President” during my presidency. In light of that, in 2020, I want to take us back to the base: partnership and one EFCA.

Living this out together

If we really want to see gospel impact through the EFCA’s different areas of ministry, we need to do this together, in partnership. The need is too great, people are too lost, the world is changing too fast for us to work alone.

A pretty profound message to the outside world is people working together because they care about each other.

I recently attended a gathering of denominational presidents where someone made a comment about the demise of denominations. Leith Anderson, recently retired president of the National Association of Evangelicals (NAE), responded with this: “Folks, be ready. Because as rapidly as our world is changing, it will quickly become a place where it is difficult to be alone."

A Sudanese friend once told me, “Kevin, this is something you need to understand: Partnerships are written in the heart before we ever write anything on paper.” A pretty profound message to the outside world is people working together because they care about each other. It all goes back to John 13: “By this everyone will know that you are my disciples, if you love one another.”

This content and video appeared in the February 2020 edition of Partners with the President. To receive future updates, you can subscribe here.