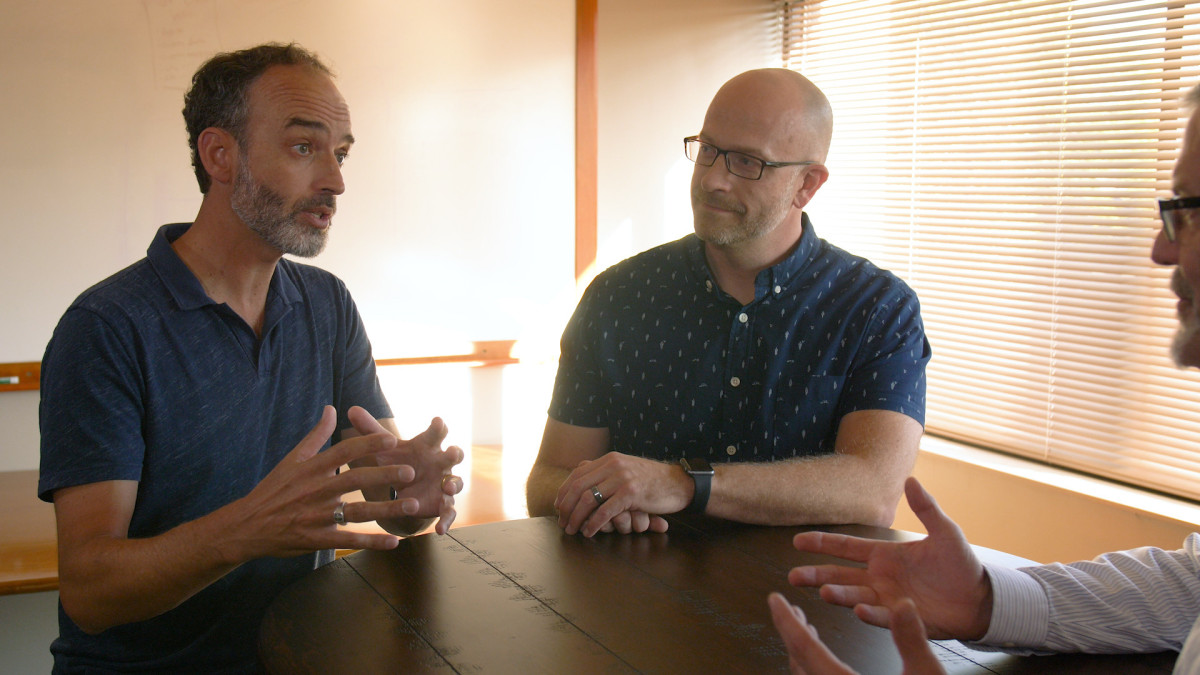 Every month, EFCA President Kevin Kompelien highlights stories, vision and leadership from around the EFCA in his monthly e-newsletter, "Partners with the President." This month, Kevin sat down with EFCA Church Multiplication leaders Andrew Hoffman and Scott Sterner (pictured above) to discuss our movement's emphasis on multiplication and the upcoming Church Multiplication Sunday 2019.

Every night at 9:38 p.m., the same notification appears on my phone: pray for church multiplication.

A year ago, we celebrated the first annual Church Multiplication Sunday across the EFCA. On that Sunday, we asked people to set reminders on their phones at 9:38 (a.m. or p.m.) to pray the words of Matthew 9:38—to “ask the Lord of the harvest, therefore, to send out workers into his harvest field.” With the number of churches that participated, we estimatee more than 50,000 people prayed for God to multiply transformational churches among all people.

At 9:38 p.m. each night, I’m ready to pray, and I’m still bumping into people today who have joined me in this focused prayer effort on church multiplication. What an encouragement it is to see the lasting impact of our celebration in 2018.

As Church Multiplication Sunday 2019 approaches, I’d like to turn our focus to the third element of the missional triangle (pictured below): strengthening, revitalizing and planting churches. More specifically, as we ask God to multiply churches across the EFCA, I’d like us to ask ourselves the question: Why do we multiply churches?

When thinking about church multiplication, it’s important we understand that Jesus didn’t tell His disciples to “go and multiply churches.” Instead, in Matthew 28, He told them to “go and make disciples.”

Evangelism should be in the DNA of all EFCA churches from the beginning.

Since early Jewish culture and the establishment of synagogues, there’s always been this innate sense of gathering together as the people of God. We see it clearly in the book of Acts. As disciplemakers multiplied disciples and those disciples gathered together, they established churches. This whole idea of planting and multiplying churches is essentially the outcome of the multiplication of disciples.

Look at the church at Antioch in Acts 11, the sending church of Paul’s first and second missionary journeys.

“Now those who had been scattered by the persecution that broke out when Stephen was killed traveled as far as Phoenicia, Cyprus and Antioch, spreading the word only among Jews. Some of them, however, men from Cyprus and Cyrene, went to Antioch and began to speak to Greeks also, telling them the good news about the Lord Jesus. The Lord’s hand was with them, and a great number of people believed and turned to the Lord.” (Acts 11:19-21)

Out of this local church—started because believers in Jerusalem went out and multiplied disciples in Antioch, who then gathered together—God called two of their leaders, Paul and Barnabas, to go on a missions journey. The focus of this journey? Bringing people to Christ and investing in their spiritual growth (multiplying disciples) so that churches could be planted (multiplying churches).

While we certainly want other believers to attend our church plants, I think the most effective church-planting strategies are grounded in both evangelism and disciplemaking. Multiplying churches are churches focused on multiplying disciples and reaching new people with the gospel. Evangelism should be in the DNA of all EFCA churches from the beginning.

Two examples come to mind immediately when I think about planting churches with evangelistic and disciplemaking intentionality. The first is the story of Crossview Church in Wisconsin Rapids, Wisconsin (in the video above). The second comes from Brian Duggan, our executive vice president of international ministries, his wife Cathi and their home church, New City Church in Charlotte.

New City Church, formerly Church at Charlotte, along with the Duggans, is currently preparing to launch a new multisite campus into a neighborhood of primarily lower-income, first-generation Hispanic, Nepali and Myanmarese immigrants. Brian and Cathi plan to move into this neighborhood and use their Spanish fluency and cross-cultural background from serving many years in Latin America with ReachGlobal to voluntarily multiply disciples through this new campus.

While New City has seen God bless the Charlotte campuses, the main goal isn’t to simply transplant their exact style and model into another community. New City is intentionally reaching a whole new group of people whom they have not yet reached with the truth of the gospel. They’re multiplying churches for the purpose of seeing new people come to Christ.

Whether it’s a multisite, second-language congregations or stand-alone church plants, ultimately, multiplication of churches results from multiplication of disciples. When we think about multiplying, we should ask: “How are we going to make opportunities for new people to come to Christ and grow? How can we plant new churches to reach new people?”

As you'll see in my conversation with Andrew Hoffman and Scott Sterner, we’re asking our EFCA churches to:

Thank you for joining us in this effort to multiply new churches to reach new people. To get involved with Church Multiplication Sunday, visit efca.org/church-multiplication-sunday.

This content and video conversation appeared in the September edition of Partners with the President. To receive future updates, you can subscribe here.