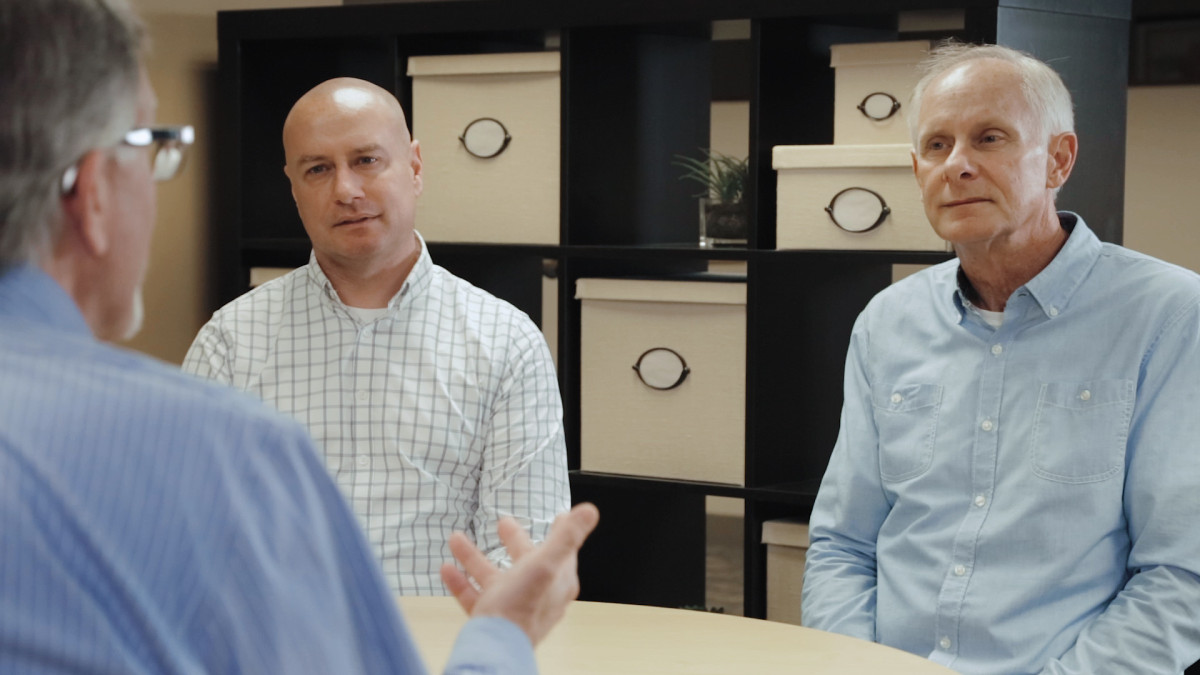 Every month, EFCA President Kevin Kompelien highlights stories, vision and leadership from around the EFCA in his monthly e-newsletter, "Partners with the President." This month, Kevin sat down with EFCA Church pastors (pictured above left) Sean McDowell and (right) Randy Discher of Constance Free Church (EFCA) in Andover, Minnesota, to discuss evangelism.

In the middle of Acts 17, Paul strays a bit from his normal evangelistic routine.

To this point, Paul would visit Jewish synagogues, meet with Jews and God-fearing Greeks and reason with them from the Scriptures. This was “his custom” (Acts 17:2). While Paul is waiting in Athens for Silas and Timothy, however, he takes it a step further:

“While Paul was waiting for them in Athens, he was greatly distressed to see that the city was full of idols. So he reasoned in the synagogue with both Jews and God-fearing Greeks, as well as in the marketplace day by day with those who happened to be there.” (Acts 17:16-17, emphasis mine)

Notice Paul’s intentionality here. Not only does he visit the synagogue in Athens, but he also goes out into the marketplace. He meets the Athenians in their context, on their turf. He joins them in the middle of their daily routine. He debates with and engages the Epicurean and Stoic philosophers. He sees a need, goes out and engages people with the gospel.

During the past three months, I’ve talked about different aspects and examples of disciplemaking (my journey, life-on-life and as life change)—the first element of the missional diagram (pictured below). In May and June, I’ll focus on the next component, “extending gospel ministries,” both from a national and international perspective.

This is what Paul is doing in Acts 17—extending gospel ministries. First, he sees the need (a “city full of idols”)—he’s not just waiting for his friends in Athens; he’s intentionally observing. Next, he goes out—he doesn’t call these Greek philosophers to the Jewish synagogues, but instead meets them in their marketplace. And finally, he engages them—he brings the message of the gospel into the relevant context of what they’re already doing.

Paul is living out Jesus’ Great Commission in Matthew 28—the same call that applies to us today. It’s this idea of “as you are going, make disciples of all nations.” As we’re in our neighborhoods, schools and workplaces, how can we bring the gospel with us? How do we take the gospel outside the four walls of our churches to impact people’s lives?

"Paul is living out Jesus’ Great Commission in Matthew 28—the same call that applies to us today."

This isn’t about a specific method or Paul’s specific technique in Athens. This is about seeing our communities through the eyes of a missionary. It’s about asking, “who’s here?”, “what needs are here?” and “how can I engage these people in conversation and share the gospel?” When we think intentionally like this, we begin to see people and situations differently. We begin to engage people in spiritual conversations.

This year, EFCA national office leaders, including myself, are participating in an evangelism cohort focused on this very subject—how do we get the gospel out into our communities? The cohort is a partnership with the Billy Graham Center for Evangelism at Wheaton College and is led by pastors Randy Discher and Sean McDowell of Constance Free Church (EFCA) in Andover, Minnesota.

As Randy (senior pastor) and Sean (senior associate pastor) lead us, they also share their stories of how God specifically directed them toward evangelism and how they’ve applied these principles and practices within their church body.

As you'll watch in our conversation (in the video below), Randy and Sean have seen consistent growth at Constance, but they began to realize new people weren’t coming to faith. This led to an evangelism journey that eventually resulted in a 10 percent conversion growth rate in their church. During the past 10 months, more than 250 new believers have come to Christ. What a testimony of the power of Christ to transform lives!

Since beginning this evangelism journey, Randy and Sean have been instrumental in launching these evangelism cohorts across the North Central District and now at EFCA the national office. At EFCA One as well, Randy and Dr. Rick Richardson from the Billy Graham Center will lead a Learning Lab regarding the topics covered in our evangelism cohort. Consider the impact if these cohorts multiplied tenfold in churches across our movement!

In what ways have you extended, or seen the gospel extended, into your neighborhoods and communities? Please reply in the comments below.

The following content and video conversation appeared in the May edition of Partners with the President. To receive future updates, you can subscribe here.