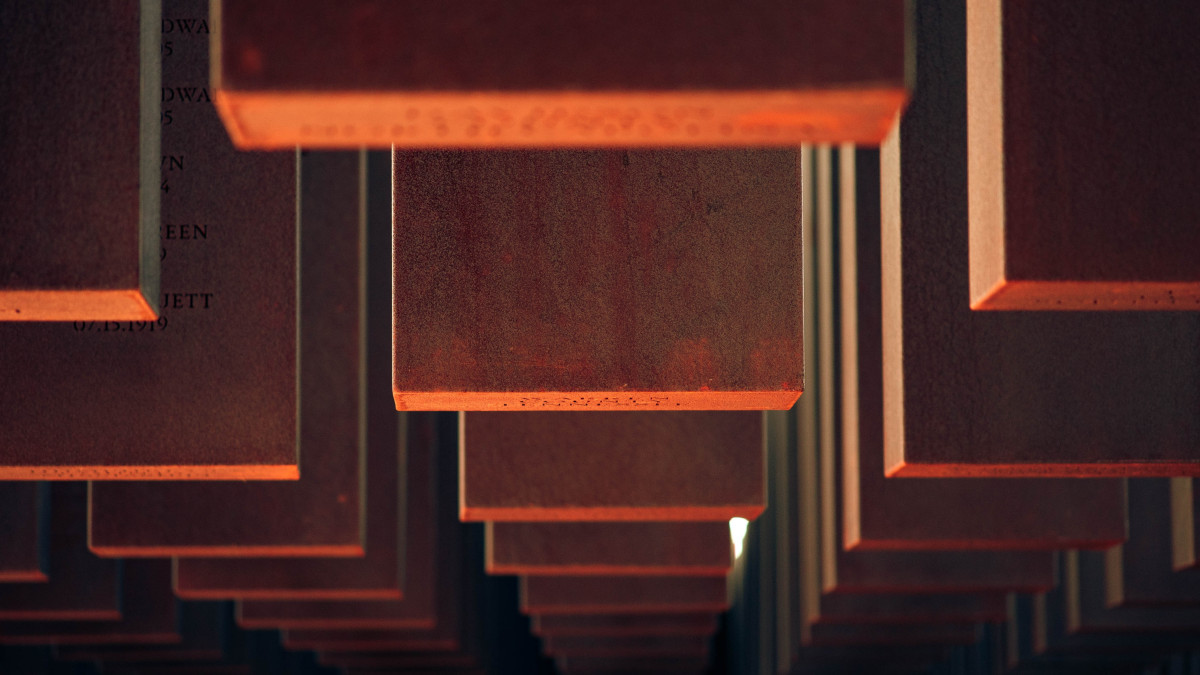 Twice each year, EFCA district superintendents from across the U.S. join together for a time of encouragement, fellowship, discussion and prayer. The gatherings usually take place at either the EFCA national office in Minneapolis, Minnesota or Trinity International University in Deerfield, Illinois. This year, however, the normal pattern was broken.

At the suggestion of Glen Schrieber (district superintendent of EFCA Southeast), most superintendents, EFCA President Kevin Komepelien and Fritz Dale (EFCA director of leadership formation and prayer mobilization) met in Montgomery, Alabama. They planned to spend time not only to dialogue, pray and plan together, but also to visit the Legacy Museum and the National Memorial for Peace and Justice and to explore the deep issues of racial reconciliation and injustice that have marked both the history of our nation and our current reality.

After a day of discussing EFCA ministry and district issues, EFCA All People leaders Alex Mandes and Steven Weathers, along with EFCA African American pastors Mark DeMire and Michael Martin, joined the other EFCA leaders in Montgomery to provide perspective and context to help prepare them for what they would see at the museum and memorial.

Six weeks later, the terror and trauma of sanctioned lynchings and racial segregation displayed at The Legacy Museum still brings me to tears.

At these two places, and in following group discussions, the leaders wrestled with what they saw concerning our country’s heartbreaking, ugly history of slavery and injustice—a story that goes back hundreds of years and still impacts us today in ways we often fail to recognize, admit or address.

Following the visit to Montgomery, we asked three of the district superintendents—Noah Palmer (Midwest District), Neal Brower (Western District) and Brian Farone (North Central District)—several questions about what they saw in Montgomery, how it impacted them and how it might change their thinking and ministry moving forward.

Q: How did the time in Montgomery impact and change your thinking?

Palmer: Six weeks later, after painfully absorbing much of the American history of slavery, the terror and trauma of sanctioned lynchings and racial segregation displayed at The Legacy Museum still brings me to tears.

I will never forget the anguish I felt, seated next to a black family with two young children, as we watched a video that showed a photograph of the February 1, 1893, lynching of the black man, Henry Smith, before a gathered crowd of 10,000 white people in Paris, Texas. The crowd cheered as he was tortured with hot irons, hung and then burned. I wanted to turn to the family and say, “We are not all that way. I am so sorry this is part of our history.” But it is part of our history. I learned that, between 1877-1950, there were more than 4,400 documented lynchings in our country, for reasons such as this: “Grant Cole was lynched in Montgomery, Alabama, in 1925, after he refused to run an errand for a white woman.”

Brower: I did not know there were lynchings in every state but five. I had no clue there is, in fact, a legitimate correlation between slavery and mass incarceration. I was overwhelmed by the four historical segments of American Slavery History: African slave trade era, domestic slave trade era, Jim Crow era and current day justice system injustice era.

To see people being advertised with marketing terms like “valuable,” “choice,” “healthy” and “quality” caused my stomach to turn and heart to ache.

In the past, I’ve taken offense when people or events have been given the label of “white supremacy.” This personal offense was challenged in Montgomery and is now slowly being eliminated. I received freedom in my heart to simply say, "black lives matter." I realized that my defensiveness for myself, law enforcement and the "progress" the U.S. has made on these issues—even as compared to so many other nations—while important, is largely irrelevant to black lives in everyday moments in so many cities across the land.

Farone: I remember standing with Pastor Michael Martin, looking together at a wall covered in real newspaper advertisements for slave auctions. To see people being advertised with marketing terms like “valuable,” “choice,” “healthy” and “quality” caused my stomach to turn and heart to ache. Truth be told, I saw more than I wanted to see that day, and I continue to wrestle with how to respond.

Often, conversations today related to race and ethnicity are filled with political agendas, in-group bias and personal attacks. They are usually more heat than light and can leave us feeling paralyzed and discouraged. This trip was different, though, it left a lasting mark on my heart and gave me hope that our EFCA family of churches can move forward together, especially in our All People efforts.*

Q: As leaders in the EFCA, how might this time in Montgomery affect your future thinking and ministry plans?

Brower: Three thoughts come to mind. (1) I've always believed that our calling includes respecting and loving each person on our pathway. That won't change. (2) I am now aware that "we don't have any racial diversity in our town" is no longer an excuse for negletcing the misperceptions and racism residing in our hearts as pastoral servants. I am inviting the pastors of my district to get honest with themselves.

I am inviting the pastors of my district to get honest with themselves.

(3) The larger change that must come is our actual belief that the blood of Christ is powerful enough to have removed every division. We all agree His blood tore the veil in the temple inviting our full access to His holiness. We agree the gospel removed the dividing wall between Jew and Greek. Practically, we then must believe and practice this "gospel idealism" by honoring, in the church, God's filling and lavish gifting poured out on every person for the building up of the body of Christ. Our unconscious, much less our formal insistence on subjugating any divinely justified, positionally sanctified child of God in any way, is, at least, unfortunate, perhaps sinful. Eliminating demographics of people "in the church," for any role, and with such inconsistency, as a claim to biblical integrity reveals hypocrisy in the extreme and must be eliminated. I must believe that Jesus' intentions were and are that every wall of partition has been removed, soteriologically and ecclessiologically.

Farone: During our time in Montgomery, I sensed a renewed resolve among our district superintendents to engage and move forward in the important area of race and ethnicity. I share this commitment and am grateful for it. I left Montgomery with a strong desire to return, and to bring other leaders from the NCD with me.

Jesus wants justice to override assumptions and “inherited” attitudes. While I still have breath, I will work to that end.

In light of this, our district is planning a similar trip for February, 2020. Likewise, the EFCA national office is hosting an All People Round Table in September, 2019, where we will be encouraged on how to move forward in this area. I am more motivated than ever to take tangible, meaningful steps forward in our ministry to all people. My hope, prayer and expectation is that the EFCA will continue to make gospel-shaped progress in our All People efforts, so that, even on this side of eternity, we will see people from every nation, tribe, people and language come to trust, walk with and serve Jesus Christ within our family of churches.*

Palmer: What is still true is the lingering assumption in the minds of many white people that the “person of color” is guilty or is some way inferior. Jesus wants us impartial. Jesus wants justice to override assumptions and “inherited” attitudes. While I still have breath, I will work to that end.

Are we validating or voiding our witness?

In light of the experiences and topics discussed in Montgomery, we also asked Pastor Mark DeMire of The Community of Grace (EFCA) in Memphis, Tennessee, about his perspective on these EFCA leaders addressing these topics and his hope for our movement, especially as it relates to these issues of race, compassion and justice.

Q: As you watched these EFCA leaders wrestle through what you witnessed in Montgomery, what did you notice?

DeMire: Surprise, astonishment and pain. The EFCA leaders and district superintendents seemed surprised at the extent and depth of the horrors of slavery, incarceration, lynching and Jim Crow in America. They seemed astonished at how slavery didn’t truly end with the Civil War but escalated and became slavery 2.0 with the failure of Reconstruction, the atrocities of convict leasing, the terrorism of lynching, the oppression of mass incarceration and the marginalization, segregation and dehumanization of Jim Crow.

I witnessed the top leaders of the EFCA being willing to open themselves up and face the truth of an ugly, painful and embarrassing past concerning their ancestors.

They seemed pained by the atrocities of white supremacy, the romanticizing and unrepentant attitude of the Confederacy and the complicity and culpability of the church in the advancement of race-based dehumanization specifically aimed at people of color. It almost seemed as if they were not sure how to correctly process the surprise, astonishment and pain of the past.

Q: What did it mean to you, personally, that they were all there to journey through this together with you?

DeMire: There was a sense of gratefulness and gladness to see our EFCA leaders receive, process and wrestle with the ugly truths about the racial past of America and the Western (white) church. The universal church has always been an all peoples assembly. But the Western church in America has not always been even close to accepting all peoples, especially people of color (brown and black).

If the church cannot rightly model justice and race relations in the church, what do we have to offer those who are watching us from outside the church? Absolutely nothing!

In Montgomery, I witnessed the top leaders of the EFCA being willing to open themselves up and face the truth of an ugly, painful and embarrassing past concerning their ancestors, and begin seeking the Holy Spirit for the best way to process and correctly move forward to the truth they received.

Q: What is your hope for the EFCA moving forward as it relates to topics of justice and racial reconciliation?

There must be an intentional effort to look beyond the lenses of dominant culture, which past Christian leaders such as Jonathan Edwards, George Whitefield and many others did not do, and intentionally look at justice and race relations within the kingdom of God through the lenses of Scripture by the power of the Holy Spirit.

If the church, who has the Spirit of God and the Word of God, cannot rightly model justice and race relations in the church, what do we have to offer those who are watching us from outside the church? Absolutely nothing! We will nullify our verbal testimony with our lack of good deeds in this area. Our Lord Jesus said himself in John 17:21, “[I pray] that all of them may be one, Father, just as you are in me and I am in you. May they also be in us so that the world may believe that you have sent me” (emphasis mine). How the EFCA handles justice and race relations within the church will either validate our witness to the outside world or void it and render our testimony ineffective.

For the first article in the series, read “Two Days in Montgomery,” written by EFCA President Kevin Kompelien. Stay tuned for the final article, in which All People leader, Alex Mandes, will provide a response to what these leaders witnessed in Montgomery.

*Brian Farone’s answers were taken directly, with his permission, from his post, “What We Saw in Montgomery, Alabama,” posted on the EFCA North Central District Blog.