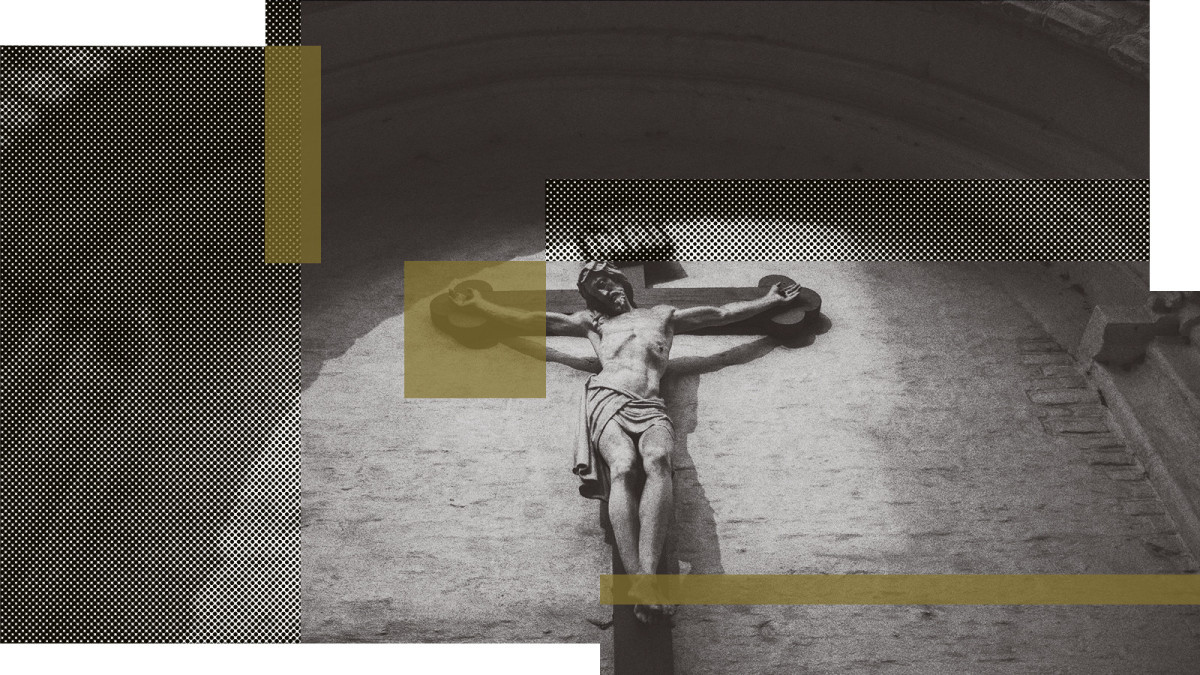 Stories of superheroes overcoming foes and average people pushed down and eventually standing up to get revenge on their enemies are popular today. Hollywood saturates movie theaters with these stories. Why? Simply because they sell. Audiences hand over hard-earned cash to see these stories come to life and then put themselves in the main character’s shoes. Yet, on Good Friday, the Gospel of Matthew tells a different story.

In many of these popular stories, a common convention is the “hero at the mercy of the villain” scene. Usually, at a climactic point in the story, the villain captures the hero, putting the hero in a dire spot. One of two things tend to happen in this scene: one, the hero escapes, or two, the hero gets revenge. You rarely see the hero do what Jesus does when He’s at the mercy of His enemies in the Gospels—nothing.

When He’s sent to be crucified, He doesn’t escape or get revenge, He endures the humiliation and pain before dying. Yet, this is what makes the gospel story radical; it’s what sets it apart, shining a light into human nature unlike any other narrative.

“Then the governor’s soldiers took Jesus into the Praetorium and gathered the whole company of soldiers around him. They stripped him and put a scarlet robe on him, and then twisted together a crown of thorns and set it on his head. They put a staff in his right hand. Then they knelt in front of him and mocked him. “Hail, king of the Jews!” they said. They spit on him, and took the staff and struck him on the head again and again. After they had mocked him, they took off the robe and put his own clothes on him. Then they led him away to crucify him” (Matthew 27:27-31).

Good Friday is the darkest day in human history. Jesus, innocent and without blemish, is beaten and humiliated before being hung on a cross. It’s in Matthew 27: 27-31, though, where Jesus, physically, emotionally and spiritually beaten with jeers and taunts and laughing, is at the mercy of His enemies. It’s at this dire moment in the story where we put ourselves in the hero’s place and expect the hero to do one of these two things.

It’s rare to see a movie where the hero isn’t captured by the villain. It’s a convention that spans almost every genre. In Toy Story, Sid captures Woody and Buzz and takes them to his house where he straps a firecracker to Buzz’s back with the plans of lighting it. In most James Bond movies, 007 is captured by his enemy, questioned, interrogated and tortured. In The Princess Bride, Westley is captured by Count Rugen in his secret dungeon. In Marvel’s Iron Man, Tony Stark is captured and forced to build a weapon for his enemy. It happens to Riggs and Murtaugh in Lethal Weapon; it happens to Frodo in Lord of the Rings: The Return of the King. And so on.

When He’s sent to be crucified, He doesn’t escape or get revenge, He endures the humiliation and pain before dying. Yet, this is what makes the gospel story radical; it’s what sets it apart, shining a light into human nature unlike any other narrative.

A hero at the mercy of the villain raises the stakes and the tension in the story. It plants fear in the audience that maybe the hero might not win and overcome his enemy. Of course, 9 times out of 10, the hero does, in fact, escape.

Whether fighting their way out with brute force, using clever psychology, slipping their hands through the rope, or just having a friend save them, one way or the other, the hero gets away.

In Stephen King’s Carrie, the titular protagonist deeply yearns to be one of the popular kids. She believes this will solve her problems. Instead, tragically, she’s ridiculed, teased and tormented by the popular kids she dreams of becoming. Later in the story, when her chance to be popular arrives—where she’s asked to the Prom by a popular guy at school—she feels things are turning around.

At the movie’s climax, she’s crowned Prom Queen and stands in front of everyone triumphant and smiling. It seems, finally, that she has found fulfillment but, little does she know, she’s a “hero at the mercy of the villain.”

While on stage, beaming, a gallon of pig’s blood pours on top of her. She realizes the truth. It was all a lie, an elaborate hoax to make her feel special and then to destroy her in front of everyone. Humiliation, like this, can sometimes be worse than death; a brutal, cruel torment that debases and strips you of your dignity.

Carrie doesn’t escape this humiliation, though; she gets her merciless revenge.

Jesus shows a different way. The Sunday before Good Friday, Jesus enters Jerusalem on a donkey, triumphant. People shout hosanna and wave palm branches, welcoming Him into their city. This is one of the highest moments in the gospel story; the moment when Jesus will supposedly take back Israel from their enemies through force.

Not long after, Judas betrays Jesus and hands Him over to the chief priests. Tried by Herod and Pilate, He is convicted and that’s where we enter Matthew 27:27.

The darkness and cruelty that hangs over this Scriptural moment is undeniable. These soldiers don’t show an ounce of mercy. Rather than taking Him to the cross as ordered, they take an extra step to torment and humiliate Him in front of an entire company of soldiers first.

These soldiers don’t show an ounce of mercy. Rather than taking Him to the cross as ordered, they take an extra step to torment and humiliate Him in front of an entire company of soldiers first.

They dress Him in scarlet with a crown of thorns and a twisted reed. For mere entertainment, they gather everyone around and put on a show to debase Jesus. They shove Jesus down as far as they can, making Him an object to laugh at for His audacity to claim Kingship.

If we’re honest with ourselves, at this moment, we want Jesus to escape this torment. We want Him to prove He is God, right then and there, and punish His enemies for their sin. Who do they think they are? How dare they do this to the Son of God? Jesus, stand up for yourself! Jesus, escape! Jesus, fight back! Jesus, get revenge!

But Jesus, the embodiment of love at the mercy of His enemies, endures suffering. He doesn’t fight back; He doesn’t escape; He doesn’t get revenge. He suffers; He takes it all. And not long after being debased and humiliated and mocked and jeered, He carries a cross to Calvary to suffer more and die.

The stories we tell and the stories we love to hear often say something about ourselves and our desires. Sometimes these common stories and conventions speak to a deeper desire within and tap into something we want. When we experience a story, we try to see things through the eyes of the main character.

In many popular narratives, we see ourselves as the hero trying to escape suffering and torment and overcoming evil by fighting back, getting revenge and defeating our enemy.

But, Jesus, the true hero, does nothing when facing his enemies and that, in turn, does everything; He endures suffering, pain and death on the cross, providing salvation for all who would believe in Him.

But, Jesus, the true hero, does nothing when facing his enemies and that, in turn, does everything; He endures suffering, pain and death on the cross, providing salvation for all who would believe in Him. In the gospel story, Jesus’ saving work on the cross carves a different path away from retribution and retaliation. Not only does He offer His enemies redemption and right relationship with Him, but He shines a light on these other stories, showing they will not save. And to be heroes in Jesus’ story means we were once enemies now reconciled with Him and must love our enemies, endure suffering and overcome evil with good, like Jesus.

On this Good Friday, let’s consider the narratives we believe, the stories we hold dear, and think on how they influence us. In that contemplation, let’s confess, believe and tell the greatest story of how the Hero didn’t escape from us, didn’t get revenge on us but endured humiliation, pain and death to save us from our slavery to sin and bring us into new life. Let’s praise Jesus' name for His heroic work on the cross.